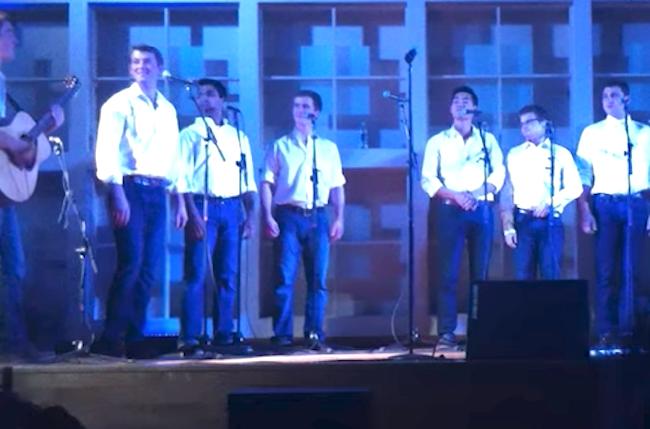 For years, shadowy a capella groups have been terrorizing college campuses with their cultish hazing rituals and bombastic covers of “Summertime” from Porgy & Bess.

Only now are some of these nefarious plots coming to light.

According to Cornell University officials, the college’s oldest all male a cappella group has been dismissed from campus for making new members put Icy Hot muscle cream on their penises.

The Cayuga Waiters has been in existence since 1949 and members perform their numbers with towels draped over their arms.

Throughout the Fall 2015 and Spring 2016 semesters, new members and non-senior members of the organization were subjected to systematic hazing activities, including, but not limited to actions such as requiring new members to: sit naked in an ice bath in a bathroom during an organization trip; apply Icy Hot to their genitals; and, race up and down a street and then consume foods.

Members of the group confessed these hazing rituals have been in effect for at least a decade.

“I agree with the UHB that the hazing violations in this case are ‘extremely serious,’ ‘dangerous and humiliating,’ and evidence of the organization “failing to meet the most minimum standards that we hold as a university community for relationships among students.” This behavior has no place at Cornell, and I agree with the URB that dismissal of the organization is appropriate.”

“We recognize that this organization has a deep history at Cornell, and I can assure you this step was not taken lightly. Still, we must act powerfully to protect the current and future students of this University when violations of the Campus Code of Conduct are established through application of the Code’s procedures. The president’s decision affirming the earlier determination of our Campus Disciplinary System does that, and I hope we can all move forward together to continue to promote a climate of scholarship and respect at Cornell.”

Here’s The Cayuga Waiters performing “We Didn’t Go To Harvard,” a twee takeoff on Billy Joel’s “We Didn’t Start The Fire.”