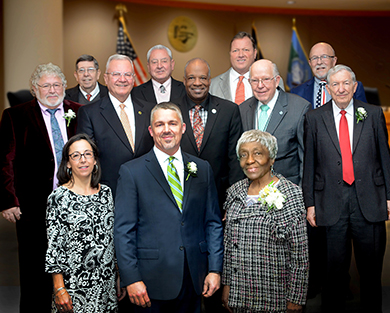 Change happens slowly. But it happens even slower in Greenville County, South Carolina.

Members of the Greenville County Council have just decided they won’t rescind a 1996 resolution that denounces homosexuality because they’ve got more important things to do.

Upstate Pride SC, a local LGBTQ nonprofit, has been pushing for the council to strip the homophobic resolution from the books for months.

A petition supporting Upstate Pride SC’s efforts has garnered almost 3,000 signatures. But, evidently, that wasn’t not enough to convince District 25 Councilman Ennis Fant or his colleagues to take any action.

In an interview with local media, Fant says rescinding the resolution isn’t a priority because it expired the same year it was passed.

“Decisions made by one council cannot bind the next council,” he explains. “So that resolution that was passed in ’96 effectively died on December 31st of that year.”

Fant adds that council members today aren’t worried about the social issues of 1996 and have more important things to worry about than making symbolic gestures that might help heal old wounds.

“We have three primary responsibilities: public safety, infrastructure and land management,” he says. “We don’t go into social issues. I’m more concerned about paving roads that desperately need to be paved than who gets to love whom.”

Upstate Pride SC says it’s aware the resolution is no longer applicable, but they believe “it’s pertinent that the view of the past county council be officially addressed and withdrawn.”

Essentially, they just want the current council to acknowledge the mistakes of the past council so that everyone can move on and feel welcomed in the future.

Honestly, it really doesn’t seem like that much to ask.

“In this era of divisiveness, it would be a welcome gesture for Greenville County Council to rescind this antiquated statute,” the group said, “and recognize their LGBTQ brothers, sisters, friends and coworkers as equal partners in this quest for the betterment of Greenville County.”

“Our personal biases should not dictate how we do business and lead the future.”