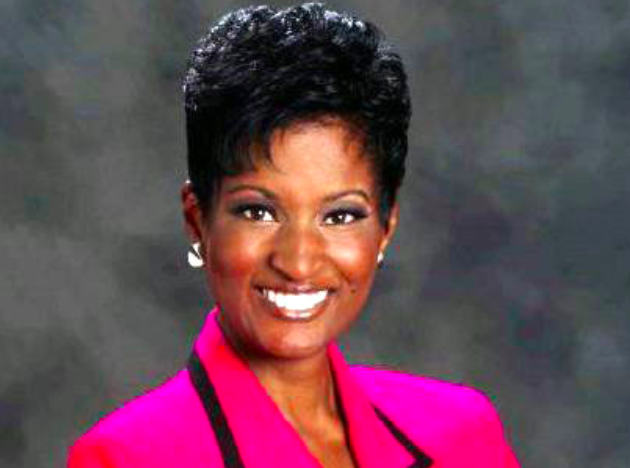 Robin Vaughn is a councilwoman from Trenton, New Jersey. She’s been facing calls for her resignation ever since she launched into a homophobic attack against the city’s first openly gay mayor during a call. Now, she says really sorry about all that, but she has no plans of vacating her seat on the city council.

The Trentonian reported this week:

She launched into a stream of curse words and personal insults after Gusciora challenged her to name one of the capital city’s “do-nothing” organizations she has criticized on Facebook. At one point, Vaughn, who previously caught heat for defending a colleague’s use of an anti-Semitic slur, called Gusciora a “pedophile,” said the mayor and Harrison weren’t “real men,” and suggested “the only thing [Gusciora] brought into City Hall is a bunch of young boys, and they’re sitting up there in the mayor’s suite.”

During the outburst, Vaughn said “we don’t have bitch ass men in my family,” only “real men,” then told Harrison to “continue to suck Reed Gusciora’s d*ck all you want to, motherf*cker” and “bend over a little lower” for the mayor.

After the story broke, Vaughn tried saying she was quoted out of context by the media and called for the complete transcript and recording of the call to be released. It was. And now she’s apologizing.

“I apologize,” Vaughn said in a statement released yesterday on Facebook. “That must be the first thing you hear from me.”

She continued, “I am deeply and specifically sorry for the language that has offended so many. It was also not my intent to attack anyone on the basis of any classification or personal preferences, but I should have been more sensitive to the potential implication of my words and how they might be perceived.” 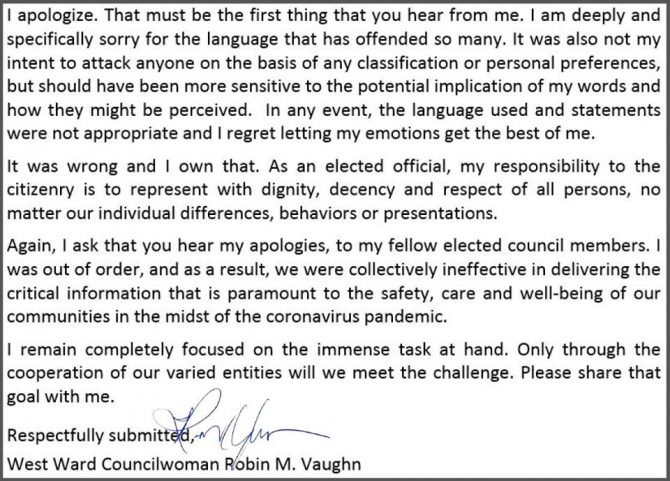 Since her outburst, Gov. Phil Murphy, Sen. Bob Menendez, and Sen. Cory Booker have all called on Vaughn to step down. Garden State Equality, one of New Jersey’s largest LGBTQ organizations, has also said she should resign.

But in a text message sent last night, the councilwoman said she absolutely, positively would not resign her seat.

Since local and state officials don’t have the legal authority to oust Vaughn from office on their own, the only way she can be removed from the governing body is either through a resignation or a recall vote.

“I was out of order,” Vaughn said in her statement, “and as a result, we were collectively ineffective in delivering the critical information that is paramount to the safety, care and well-being of our communities in the midst of the coronavirus pandemic.”