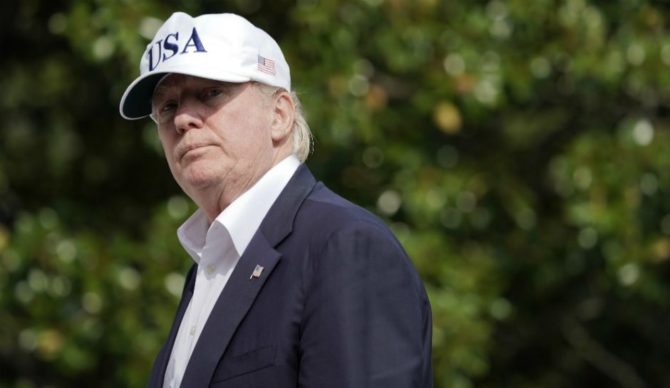 In not one but two different Hurricane Harvey photo ops this week, Donald Trump made a point of wearing his new 2020 reelection campaign baseball caps. Oh, but it doesn’t stop there. The photos were then distributed to the press by the White House.

The hats, which currently go for $40 a pop on Trump’s campaign website, come in three different colors–red, white, and camo and are emblazoned with “USA” on the front and “Trump” on the back along with the #45 on the side.

To quote the New York Times:

Mr. Trump, we are reminded every day in ways we would not have imagined the day before, speaks and acts in the interests of himself and no one else.

Image #1: Picture of President Trump in a red hat, distributed by the White House
Image #2: Your chance to buy the red hat from his campaign pic.twitter.com/hehsMRYcyw

Meanwhile, Trump was promoting a right-wing extremist sheriff's book and posing in a hat he sells for $40. https://t.co/3biZZ8h3vh

Now we know why Trump was wearing that idiotic hat in his #Harvey photo op.

It was product placement. Disgusting. pic.twitter.com/koidDIO8Kd

Are the $40.00 per hat proceeds from the sale of those USA hats #DonaldTrump is promoting going to #HurricaineHarvey victims?? ?

The hat he wore during a call discussing Hurricane Harvey is on sale on Trump's campaign website.

I shit you not. https://t.co/iwLhRbEhzw

The presser would be more convincing if POTUS weren't wearing merch touted as the hat “worn by 45thPresident-Elect Donald J. Trump, himself” pic.twitter.com/kbv0KFvaS9

For a third time, Trump is using Hurricane Harvey as product placement for a hat he sells for $40 pic.twitter.com/8Js7DEnbAs