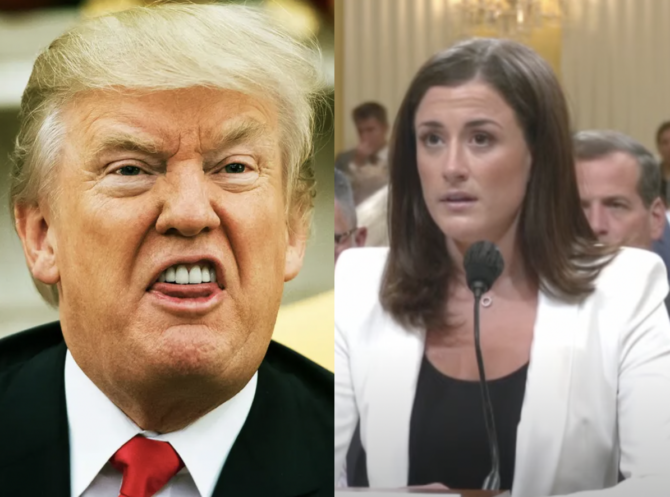 The first hour of Hutchinson’s testimony was basically one bombshell after another, without a single break in between. It’s virtually impossible to write a recap because every minute contained new and shocking information, but here are some of the biggest highlights:

But the moment that seems to have everyone talking is when Hutchinson described in vivid detail Trump’s reaction to former Attorney General Bill Barr telling the Associated Press that the Department of Justice hadn’t found evidence of widespread voter fraud in the 2020 election.

“He motioned for me to come in and then pointed towards the front of the room near the fireplace mantle and the TV where I first noticed there was ketchup dripping down the wall and there’s a shattered porcelain plate on the floor.”

According to Hutchinson, the valet told her Trump was “extremely angry” at Barr “and had thrown his lunch against the wall, which was causing them to have to clean up.”

Donald Trump was so upset, he threw his lunch and ketchup dripped down the White House wall. pic.twitter.com/cnypEymBxn

Shortly after Hutchinson recalled the plate-throwing incident, the word “ketchup” was trending on Twitter.

Cassidy Hutchinson confirms Trump went ballistic and threw his lunch at the wall on Jan 6, ketchup dripping everywhere because they wouldn’t take him to the Capitol. Arrest Trump.

KETCHUP DRIPPING DOWN THE WALL.

As perfect an epitaph for the age as any.

Someone better check the walls at Mar-a-Lago for ketchup

I knew ketchup would eventually be involved.

Unhappy Meal… I’m still wrapping my head around the fact that a 74 year old president of the United States was having a lunch that involved so much ketchup.

The walls of mar-a-lago are getting a new coat of Heinz right about now.

"Ketchup dripping down the wall" – the most exquisite and perfect image of the entire Trump Presidency. How utterly appropriate.

So it was ketchup, no one got it until now. Very clever #January6thCommitteeHearings #January6thHearings #lincolnproject #ketchupgate pic.twitter.com/oV7pyzU2WT

Tag yourself in this January 6th committee hearing. I'm the ketchup dripping down the wall.

I feel bad for the housekeeping staff at Mar-a-Lago. They're going to be cleaning up ketchup for days.

Can't stop thinking about the young female aide called in to clean the ketchup dripping down the wall after the President threw his lunch in a fit of rage because he couldn't go watch the violent insurrection he fomented.