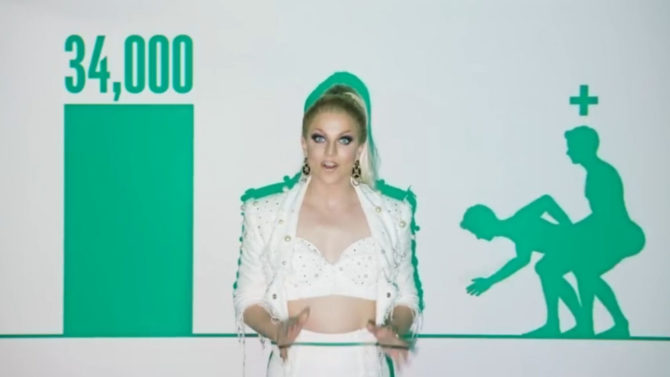 Who She Is: Singer, reality show contestant, model and drag queen

Why She Matters: After making it to the finals of Drag Race season six, Courtney maintained a strong public presence singing with the San Francisco Symphony Orchestra (and was the first drag queen to do so), modeling for American Apparel, and winning the UK version of Celebrity Big Brother, which she managed to fully integrate with all things LGBTQ.

Why We’re Proud: Courtney’s appearance on Celebrity Big Brother marked a new level of visibility for the community, as she championed her cause and became fully integrated with the rest of the cast–a first for a drag queen. Not only did she become a voice for queer people, she also became the voice of stability and reason on a show with a reputation for nincompoopery.

Fresh from her Big Brother win, Courtney embarked on a tour of Oceana, stopping off in New Zealand to film a PSA video educating viewers about living with HIV. Act became the spokesperson for the New Zealand based “Ending HIV NZ” campaign. She’s become the face of ending HIV stigma for an entire nation, educating viewers on how HIV+ people with undetectable viral loads cannot transmit the virus, and sharing her own experiences in a serodiscordant relationship.

“An ex-boyfriend of mine is living with HIV,” Act revealed as part of the campaign. “He has an undetectable viral load so I know first-hand how this can affect people in a serodiscordant couple – which is where one partner is HIV-negative and one is HIV-positive. It was great to know he could have much better health in the long-run and that scientific evidence shows he was unable to pass on HIV on to me, even without condoms. We live in a fear-based world where HIV stigma can prevail, but armed with science and facts I was able to break down the stigma in my own mind and be in a happy and healthy relationship with my partner.”

What more can we say about Courtney’s Act-ivism? The specter of HIV still looms large over the community. Educating people—gay and straight alike—about how simple treatment for HIV can reduce or even eliminate the risk of transmission goes a long way toward ending the fear associated with the virus.

Check out Courtney’s PSA below: