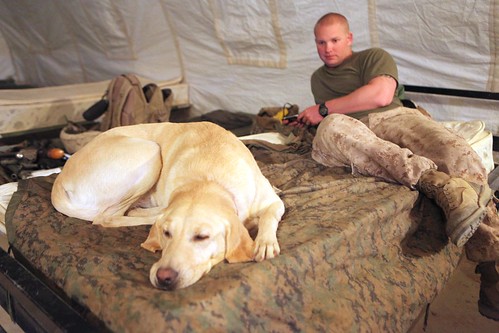 So it’s no surprise that crazy-ass conservative groups are now trotting out a”slippery slope argument” claiming the repeal of Don’t Ask, Don’t Tell has cleared the way for the military to legalize bestiality.

Here’s what really happened: Despite the fact that the Supreme Court threw out anti-sodomy laws  in 2004, the bowels of the Uniform Code of Military Justice still contains some obscure anti-sodomy language stating that any soldier who “engages in unnatural carnal copulation with another person of the same sex or opposite sex or with an animal is guilty of sodomy.”

Kind of reminds us of the old saying that the only unnatural sex act is the one you’re unable to perform.

Military officials want to get with the 21st century and remove that passage, because sodomy isn’t a crime anymore. But insane family-values types are losing their marbles over this, claiming that deleting this language equals a tacit approval of dog-fucking. Just to be clear, it’s not. “The department’s position on this issue remains unchanged and that act remains illegal,” defense spokesman Lt. Col Todd Breasseale told Military.com.

That hasn’t stopped the Family Resource Council from sniffing out the gay agenda’s “campaign to radicalize the country from the Pentagon out.”

A blog post titled “Bestiality Should Give Leaders Paws in Troop Bill” reads in part:

“This is the slippery slope that FRC warned of. For three long years, President Obama has worked to draft the military into his radical social agenda. Obviously, the administration understands that once it breaks down the values and inhibitions of our Defense Department, society will be easier to wear down. Here, the unintended consequence of that push opens the door to an act so vile it’s embarrassing to mention–let alone tolerate.”

But while the FRC hid behind its desks like cowards, Intrepid WorldNetDaily reporter Les Kinsolving bravely took the bestiality question to a White House press conference. And press secretary Jay Carney refused to answer the question on the grounds that it wasn’t “serious.”

There you have it, folks. The White House is covering up its legalization of bestiality at the highest levels.