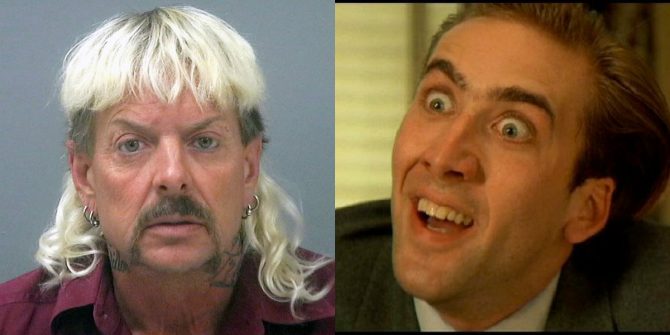 The Tiger King saga continues, this time with the announcement that Academy Award-winning actor Nicolas Cage will play Joe Exotic in a new series for CBS Television Studios.

The Netflix series Tiger King details the life of Joe Exotic, a would-be musician, politician and reality show star with a private zoo in rural Oklahoma. Exotic’s life went off the rails after a longtime feud with fellow tiger lover Carole Baskin and a series of tragedies in his personal life, including the death of his husband, Travis Maldonato. The show became a phenomenon upon its debut on Netflix in March.

Related: Is Nick Cage Getting In Bed With Kirk Cameron For New Rapture Flick?

Cage, the star of films like Leaving Las Vegas, The Rock, National Treasure and Adaptation, seems well suited for the role. As one of Hollywood’s most notorious eccentrics, having purchased a private island, a number of castles and collector’s items like Action Comics #1 (in which Superman makes his debut appearance) and a dinosaur skull. His exotic tastes landed him in trouble with the IRS for unpaid taxes in 2009, and has since taken roles in a series of dubious projects (like the Left Behind reboot) to settle his finances.

American Vandal showrunners Dan Lagana and Paul Young will develop and produce the show. This is, for the record, an altogether different adaptation of the Joe Exotic saga than the one in development at Universal Studios, set to feature Kate McKinnon as Carole Baskin.

No release date for either project has been announced, and with COVID-19 continuing to shutter production in Hollywood, it could be some time before Joe Exotic hits screens.