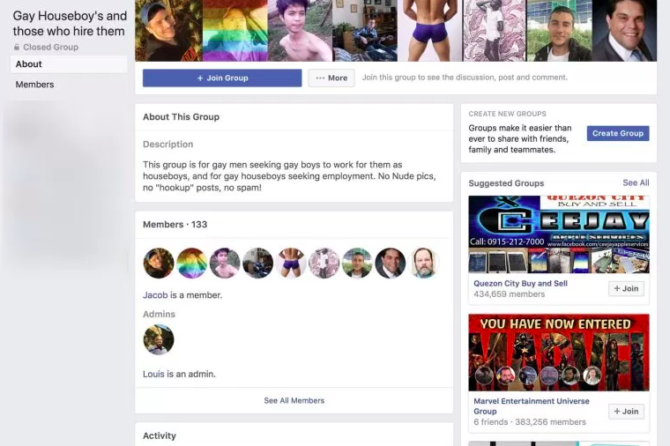 Oy! We’d hate to be in charge of Facebook’s PR department these days.

It all started when reporter Patrick Strudwick stumbled upon a Facebook group called “Gay Houseboy’s and those who hire them.”

The page describes itself as a “group for gay men seeking gay boys to work for them as houseboys, and for gay houseboys seeking employment” and claims to have a strict “No nude pics” and “no ‘hookup’ posts” policies.

But Strudwick quickly learned that’s not the case.

In multiple interviews with the men exchanging sex for rent and groups trying to deal with the crisis, BuzzFeed News also uncovered a spectrum of experiences that goes far beyond what has so far been documented, with social media, hook-up apps, and chemsex parties facilitating everything.

At best, impoverished young men are seeking refuge in places where they are at risk of sexual exploitation. At worst, teenagers are being kept in domestic prisons where all personal boundaries are breached, where their lives are in danger.

22-year-old Denholm Spurr is one of the young men who got sucked into that dangerous vortex, spending three years hopping from one sex-for-rent arrangement to another.

“I was really vulnerable,” he says. “I didn’t have the capacity to make decisions that were in my own interest.”

Often the arrangements also included participating in group sex and PNP parties, which he felt obligated to partake in.

“I would just go from one to the next because I thought if I leave I’ve got nowhere to go,” he says. “There were times,” he says, “I went under [lost consciousness] on G and then I woke up and someone was f*cking me.”

Spurr says he felt powerless to say no for fear he would be thrown out.

“I felt more worried about upsetting them than I did my own self-respect,” he says. “I didn’t have the strength to say no. I became what I felt people wanted. I branded myself as this ‘sexual being’ that other people fed off. I felt that’s what I needed to do.”

Strudwick spoke to several other young men who also found themselves victims in these arrangements and ended up “raped, beaten, drugged, infected with HIV and treated as domestic slaves.”

Buzzfeed News says that Facebook has promised that a representative would comment but, so far, that hasn’t happened.