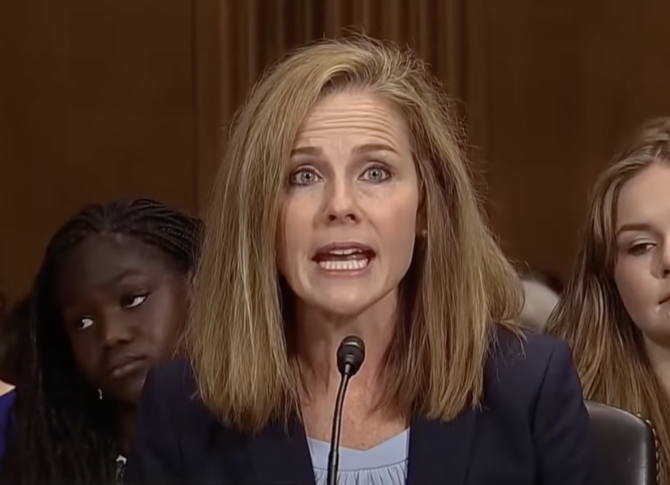 Justice Amy Coney Barrett has been trending on Twitter all morning after The Guardian published a bombshell report about People of Praise, a Christian collective where she once served as a female leader.

People of Praise was founded in South Bend, Indiana in 1971 by Kevin Ranaghan and purports to be “a charismatic Christian community” that “provides a natural support for marriages and families” and is “led by the Holy Spirit.”

In reality, it’s a cult that expects women to be docile and subservient and believes homosexuality is a sin and gay marriage is evil. Members who admit to engaging in any sort of homosexual activity are immediately expelled, and children with same-gender parents are banned from the group’s schools.

The group is not a church, but it does have 501(c)3 status, which means it doesn’t pay taxes on the huge amounts of money it brings in by forcing members to fork over 5% of their annual income to remain in good standing.

Barrett’s involvement with People of Praise was first reported during her Supreme Court confirmation hearings, but the story didn’t as much attention as it probably should have since it was October 2020 and we were in the middle of a raging pandemic, there still wasn’t a vaccine, and the 2020 presidential election was less than a month away.

But it’s getting a ton of attention again now that The Guardian has reported on newly uncovered court documents in which a former member described instances of inappropriate sexual behavior and abuse in the home of Ranaghan and his wife Dorothy.

The sworn affidavit was submitted in 1993 by a woman named Cynthia Carnick, who wanted to protect her five children from visitations with their father, John Roger Carnick, who was then a member of People of Praise, when the Ranaghans were present.

Carnick alleged that Dorothy Ranaghan tied her daughters, age 2 and 5 years old, to a crib with a necktie, and that she and Kevin Ranaghan performed “sexual displays” in front of her children as well as other adults in their TV room.

Another former member Colette Humphrey is also mentioned in the affidavit. She describes a cult-like atmosphere where members were forced to hand over their paychecks and had their personal and romantic lives closely scrutinized.

“When I was part of the People of Praise I was in full life submission to Kevin Ranaghan, under full obedience to him and he exercised this authority over most areas of my life,” Humphrey alleged. “Kevin Ranaghan controlled my dating relationships, deciding who and when I should date.”

Oh, but it gets creepier. Because not only was Barrett a female leader in the cult, she personally stayed with the Ranaghan’s in their nine-bedroom South Bend home for two years after graduating from law school in 1997.

Her husband, Jesse, also appears to have lived at the house, although there’s no indication either of them have any direct connection to Carnick or the disturbing behavior described in the affidavit.

Barrett has not commented on any of this, but Twitter certainly has a lot of thoughts on the matter.

No one, absolutely, NO ONE, is surprised that Amy Coney Barrett is part of a cult.

All of this about Barrett was out there on the table in 2020. And it didn’t make any difference. She was fast pathed thru the confirmation process.

Justice Amy Coney Barrett is a religious ultra-radical, an alt-right “christian” nut job who has no business being on SCOTUS. https://t.co/jlO9QN3j6r

Who else thinks that Amy Coney Barrett should be investigated and impeached for being in a cult?

Amy Coney Barrett’s religion and associated cults, like People of Praise, have minimized what it means to be a woman her whole life. She’s not fit to make logical decisions in the court of law, especially on behalf of America’s women.

Of course Amy Coney Barrett wants to force children to have their rapist’s baby. This is the same woman who’s cult leader abused children and showered with his eleven and ten year old daughters.

No one should be surprised Amy Coney Barrett is in a cult, but we should be very scared.

Was that the same cult Ginny Thomas was a part of?

The power and influence of the Religious Right for 40 Plus Years!

This is one twisted cult Amy Coney Barrett was immersed in — and perhaps still is.

…sexual displays in front of children. Don’t they call that….grooming?

Me opening this bird app and seeing why Amy Coney Barrett is trending. pic.twitter.com/lByc9SOk5F

Related: Marsha Blackburn has some thoughts about Amy Coney Barrett’s cult and we’re all a little dumber now