As antigay activist/admitted sexual predator Josh Duggar awaits his child pornography trail, which is scheduled to begin on July 6, a social media post he wrote seven years ago has come back to haunt him.

The comment was made in 2013 and appeared on his sister Jessa’s then-boyfriend/now-husband Ben’s Facebook page. On a photo of Ben and Jessa, Josh commented, “I’m watching you” along with a set of eyeball emojis. 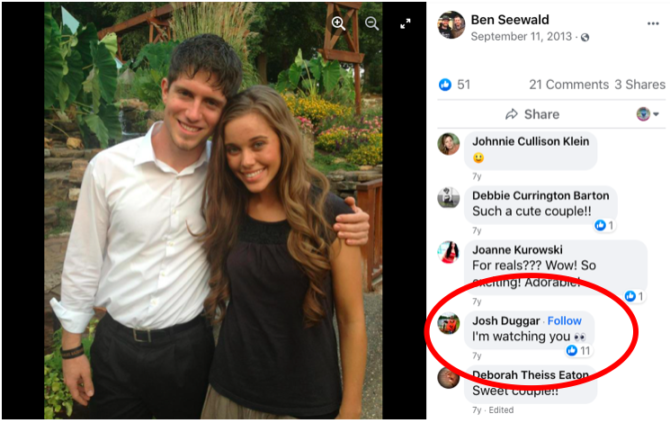 The remark wasn’t necessarily creepy in 2013. It sorta just read like a big brother looking after his little sister. But it’s creepy AF today, given everything we know about Josh’s voyeuristic tendencies.

In 2015, he admitted to molesting several girls, including Jessa, in their sleep. Despite claiming God had forgiven him, he lost his job with the antigay hate group Family Research Council and TLC canceled the Duggar family’s megahit reality show 19 Kids and Counting.

This isn’t the first time past remarks by Josh have taken on a new meaning either.

A while back, an old clip from 19 Kids and Counting in which he made an incest “joke” recirculated online. We use parentheses because, as it turns out, Josh wasn’t joking when he said that sometimes people in Arkansas engage in incestuous behavior.

The 33-year-old father of seven was taken into custody by Homeland Security in April for allegedly downloading over 200 photos and videos of children in compromising and abusive situations. He pleaded not guilty receiving and possessing child pornography.

In May, he was released from jail pending trial but the judge said he can’t be alone with his children, he must wear an ankle monitor at all times, he can’t use the internet, and he can’t leave the house without getting a probation officer’s permission.

If convicted, Josh could go to jail for 40 years.