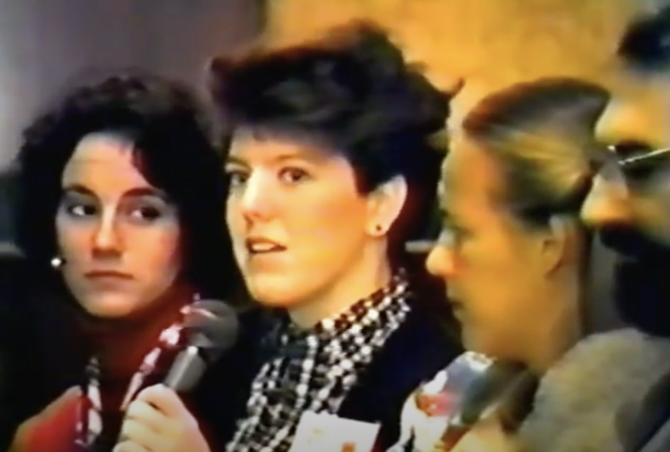 Hey, remember the weird fat-shaming cult Clarence Thomas’ MAGA-obsessed wife Ginni belonged to in the ’80s that we told you about back in January? Well, a newly unearthed video of her talking about it has surfaced and it’s deeply unsettling.

Cult expert and author Steven Hassan shared the clip on Twitter yesterday, where it quickly racked up over 1.3 million views in less than 24 hours.

“I knew Ginni Thomas. Ginni Thomas was in a cult (the large group awareness training cult, Lifespring). Here she is in 1989 speaking at an event I hosted for former members. Until today, almost NO one has seen this video,” he tweeted.

I knew Ginni Thomas. Ginni Thomas was in a cult (the large group awareness training cult, Lifespring). Here she is in 1989 speaking at an event I hosted for former members. Until today, almost NO one has seen this video. pic.twitter.com/qMX4fKboxg

Lifespring was founded in 1974 and billed itself as a “self-awareness program” that taught members how to be more accountable in their personal and professional lives. In reality, organizers took people’s money, forced them to participate in weird “training sessions”, and then wouldn’t let them leave when they wanted to.

Thomas, who hates LGBTQ people and believes “transsexual fascists” are ruining America, had recently flunked the bar exam and was working as congressional aide when she connected with the group in the early 1980s. She was a member for several years before realizing something was amiss.

In 1987, she told The Washington Post that the training sessions left her feeling “confused and troubled”, particularly when she and the other trainees were instructed to get completely naked, form a U-shape, and “[make] fun of fat people’s bodies and [ridicule] one another with sexual questions”.

Nevertheless, she stuck around. It wasn’t until she realized Lifespring was separating her from her friends and family that she got really suspicious.

In 1991, she told the Washington Post, “I had intellectually and emotionally gotten myself so wrapped up with this group that I was moving away from my family and friends and the people I work with. My best friend came to visit me and I was preaching at her using that rough attitude they teach you.”

Thomas has been under intense scrutiny for the last week, after text messages obtained by Washington Post reporter Bob Woodward and CBS News correspondent Robert Costa showed she repeatedly pestered ex-White House chief of staff Mark Meadows about overturning Biden’s victory in the weeks following the 2020 presidential election. Now, there is talk the January 6 committee is seriously considering calling on her to give testimony.

On top of that, a report from the Daily Beast published today details how Thomas leveraged her position as the wife of a Supreme Court justice to get Donald Trump‘s attention, flatter him, and pitch potential hires for the White House, including “infamous bigots and conspiracy theorists, woefully under-qualified names, and obvious close friends of Thomas.”

Check out what people are saying about the video Hassan shared…

I don’t mean to be impolite, but I didn’t hear a concrete thought out of her in that recording.

Deprograming was not so successful!

When I was 19, a friend brought me to a huge Lifespring event. The speaker urged people to join them in realizing their full potential and various other self-indulgent pursuits. I couldn’t believe what a crock it was and that people much older than I fell for it. I walked out.

Thanks for this and your books. The psychology of cult joiners is fascinating, I’ve seen this same lost desperation (often leading to rage as it’s unfulfilled) in many Q Trump supporters around me.

I went to high school with her in Omaha graduated the same year. She was smart and creepy, even then you knew to stay away from her

OMG. I never would have believed that. I mean, I knew she had been in a cult. But – she was – kind of cute.

Now we find out that before she married #ClarenceThomas, #GinniThomas was in a CULT whose members engaged in among other things, STRIPPING NAKED and making fun of each other’s bodies

Oh My God Steve. Ginni Thomas has had a significant relapse since this video clip. It’s hard to do worse than the EST/ Forum/ Lifespring garbage, but she found it with Q & Maga.

People with identity crises & personality disorders are drawn to cults. Many of those who leave one, I believe, just find a new one.