St. Patrick’s Day approaches and we’re already planning our green wardrobe and dusting off our green beads. Whether you plan to spend the day out with friends or home relaxing–or, for that matter if you need something for recovery–we’ve got everything you need to keep you entertained, and in the spirit of the gay Irish.

So, fasten a shamrock to your chest, and get ready…

The Timely: The Crying Game

In honor of St. Patrick’s weekend, we recommend revisiting this modern masterpiece about the plight of Northern Ireland during the terrorist conflict of the Irish Republican Army. Even better, it’s also one of the queerest movies to ever come from the Emerald Isle. Director Neil Jordan scored a much-deserved Oscar for his script about an IRA agent (Stephen Rea) who falls for…well, we don’t want to spoil things here. We will, however, point out that The Crying Game has one of the best, most forward-thinking transgender characters in the movies, and that the film also does something bold even by today’s standards: it makes her the hero.

This Dutch gem picked up momentum on the festival circuit last year. Director Ellen Smit helmed this romance about a gym rat named Joris, and a circuit party boy named Yad who form an unlikely friendship in a small town in the Netherlands. As the pair take refuge in one another from their oppressive families, sexual tension begins to mount, which only complicates matters. Will the two guys make it (as it were)? We’ll not reveal that here, but we will commend Just Friends for its examination of a cross-cultural love story, and for its focus on Yad’s journey as a gay Muslim.

The Bloody Dumpster Fire: The Inventor

Still obsessed with the Fyre Festival disaster? Us too. For a further exploration of the culture of con men and FOMO, look no further than Oscar-winner Alex Gibney’s latest outing, The Inventor: Out for Blood in Silicon Valley. Gibney, who took on Scientology in Going Clear and Dick Cheney in Taxi to the Darkside, this time shines his spotlight on Theranos, the notorious biotech company started by Elizabeth Holmes. The media once trumpeted Holmes as the youngest self-made billionaire in history and valued her company at a staggering $19 billion thanks to a groundbreaking machine that could test patients for anything using only a finger prick drop of blood. The catch: Holmes lied. The machine never worked. As with Fyre and Fyre Fest, The Inventor plays like a slow-motion train wreck, and we just can’t look away.

We’ve already recommended Nelson Lassiter’s binge-worthy web series Single Record about a gay hip-hop artist. This week, Lassiter releases the soundtrack to the series, which encompasses seven new tracks, all penned by the series creator. Even better: Several of the tracks relish the homoeroticism and have plenty of references to queer life and culture. That alone makes the Single Record soundtrack noteworthy, as it steers hip-hop into some innovative new territory, and adds some much-needed gayness to the genre.

The Classic: Homer vs. the Eighteenth Amendment

Even we can’t believe this staple of Fox television—one of the best shows ever—still remains in production more than 20 seasons in. For a little St. Patrick’s Day fun, check out this underrated episode about the town of Springfield adopting prohibition. In protest, Bart & Homer launch their own underground brewing operation, which results in some very big laughs. Some of our favorites: a drunken Apu getting naked during the parade. A mournful Barney leaving roses outside a brewery. And the best of all: a very sharp jibe about Irish-Americans banning our crowd from marching in the holiday parade. It reminds us why we fell in love with the show in the first place: it supported queer equality at a time when nobody would even admit we existed.

The Sip: The Shamrock 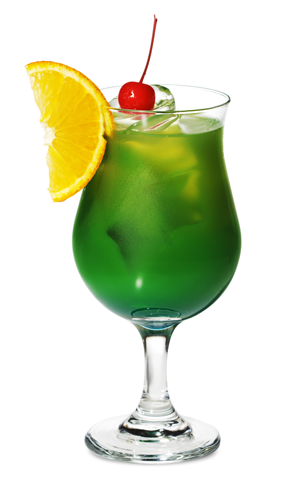 In case whiskey and green beer are not your jams, have a sip on this St. Patrick’s Day concoction which fuses fruity flavors with one hell of a wallop.

Mix liquors in a parfait glass over ice. Fill the rest of the way with orange juice. Garnish with a cherry or orange slice.