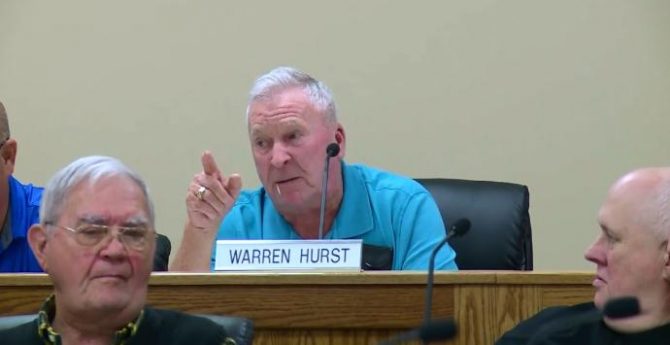 Yesterday, Hurst exploded into anger at a public meeting over whether to become a gun sanctuary city.

Speaking with a toothpick hanging from his mouth, he raged: “It’s time we wake up people, it’s been time, it’s past time. We gotta queer runnin’ for president, if that ain’t about as ugly as you can get!”

“Look what we got runnin’ for president in the Democratic party,” the 77-year-old continued. “We can go over here to [Sevier County Sheriff] Hoss’s jail and get better people outta there than those runnin’ for democratic to be President of the United States.”

Comments made by a Sevier County commissioner drew applause from many but caused one woman to storm out Monday night. See his full comments here –>> https://bit.ly/2MyPIqc

While some people in the room applauded Hurst’s homophobic remarks, others were mortified. One woman stood up and said, “Excuse me. This is not professional. This is f*cked!”

After she stormed out of the meeting, Hurst went on to insist his remarks do not make him a bigot, even though they do.

“I’m not prejudice,” he bemoaned. “But, by golly, a white male in this country has very few rights and they’re gettin’ took more every day.”

When asked for comment by local media, Hurst said he stands by his words, including the gay slur, then added he has a right to his own opinion. He is also ignoring calls for his resignation.

Related: This bisexual Democratic candidate has Republicans shaking in their boots and for good reason