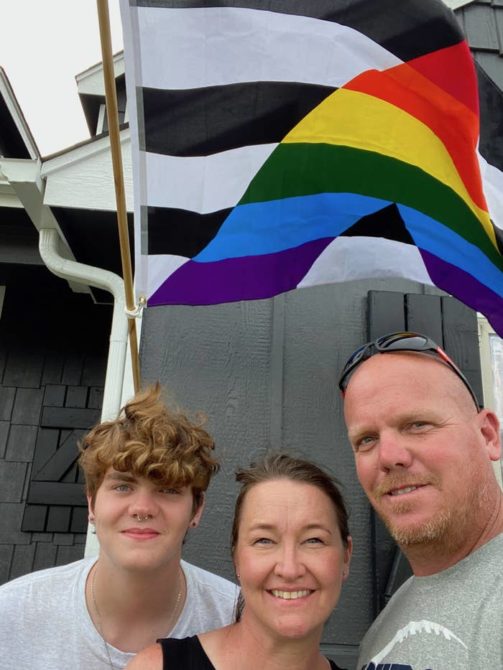 The father of a 15-year-old gay son sent a powerful message to this world this week, as the pair raised an ally pride flag outside their home. Video of the flag-raising has since gone viral on TikTok.

John Wyatt, 45, helped commemorate the one-year anniversary of his son, Caden’s, coming out by raising the ally pride flag outside their Owasso, Oklahoma home. As an added effect, Lady Gaga‘s “Born this Way” played in the background.

“We are fixin’ to shock Oklahoma,” Wyatt says in the video with a puckish grin.

“We’re letting people know it’s a safe place,” Wyatt elaborated to BuzzFeed. “I’m not trying to cause any controversy in the neighborhood, but maybe there’s some person out there who will see that flag and smile and feel safe.”

“I’m really lucky to have such supportive parents, because I know a lot of other people aren’t as lucky as me,” Caden added. “I want people to know that my parents have their back, and so do I.”

In the same interview, the Wyatts also expressed their initial nervousness over flying the flag–they feared it would get stolen, or vandals would deface their home. Fortunately, at the time of this writing, nobody has.

“I was kind of nervous at first, because I didn’t know how people were going to act, but I just don’t really care what they think anymore,” Caden said.

Caden welcomes the acceptance, particularly in a neighborhood chocked with Blue Lives Matter, Trump and Q-Anon flags. For him though, acceptance or hostility won’t stop him from living openly.