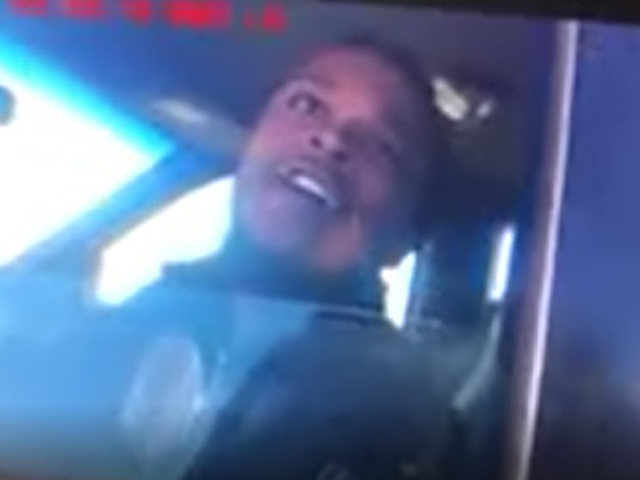 Someone from inside the Aurora Police Department in Colorado leaked police body cam footage of Denver Mayor Michael Hancock’s telling a police officer “My dad’s the mayor, you f*cking f*ggot!” during a traffic stop.

The 20-second clip came was sent by an anonymous source to The Denver Channel, which published it this morning. The footage was recorded back in March after 22-year-old Jordan Hancock was pulled over and ticketed for going 65 in a 40-mph zone.

“Guess what? I’m about to get you fired you f*cking b*tch,” Hancock can be heard saying to the officer. “My dad’s the mayor, you f*cking f*ggot!”

WARNING: This video has explicit language.After getting pulled over for going at least 25 mph over the speed limit, Denver Mayor Michael Hancock’s son, Jordan, gets in a heated exchange with an Aurora police officer who ended up citing him.MORE: http://bit.ly/2FTGTkh

Given this country’s very serious problems when it comes to how law officers treat young Black men, we can understand why Hancock might have been upset; however, that doesn’t excuse his choice of words.

Hancock appeared in court on Monday where he agreed to pay a $250 fine for speeding. When asked by the judge why he was driving so fast, Hancock explained he was “running late.”

In a statement, Mayor Michael Hancock said, “We addressed this matter with Jordan and he has apologized to the Officer” adding that “we do not support nor condone [Jordan’s] inexcusable actions and words during this traffic stop” but that “we love our son dearly and support him.”

We've addressed our son's behavior at a traffic stop w/him. He's apologized to the officer. While we don't support nor condone his inexcusable actions & words, we love our son dearly & will work w/him to turn a personal mistake into a valuable lesson for himself & the community.

The Aurora Police Department has issued the following statement in response to the leaked video:

The Aurora Police Department was made aware of an unauthorized release of a body camera video to a local media outlet that captures one of our officers interacting with a motorist on a traffic stop.  Upon reviewing the footage at an administrative level, the officer was in compliance with Department policies throughout the encounter. Currently, the matter is pending before the City’s municipal court. Therefore, the Department cannot comment further on the details of the incident.

However, it is of great concern to the Aurora Police Department that the video was released without departmental authorization, especially while the matter is pending prosecution.  We will be conducting an internal investigation into this matter to determine the circumstances under which this video was released.  Any member who is found to have violated departmental policies and procedures will be held accountable.

We’re not holding our breath that anything will come of this “internal investigation.”

Related: Kyle Krieger has an important message for all you gay white men out there