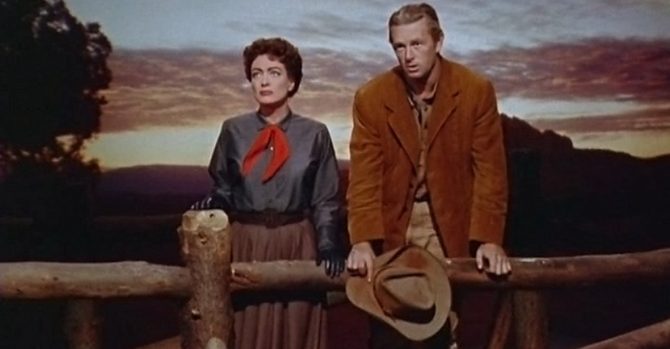 We get requests here at Queerty’s Daily Dose for the occasional cinema classic, preferably starring an old Hollywood star. Today we indulge said desires: we offer up Johnny Guitar starring Joan Crawford in all its weird glory.

Why weird? Johnny Guitar casts Crawford as Vienna, a tough, no-nonsense saloon owner who happens to be more than a little butch. Even though she ostensibly has a romance with Johnny Guitar (Sterling Hayden), the real sparks fly between Vienna and Emma Small (Mercedes McCambridge), a local woman nursing a longtime grudge against Vienna who vows to see her run out of town. Vienna responds by getting more butch, donning jeans, a man’s shirt, and stripping a six-shooter to her waist.

Contemporary critics noted the subtle digs at the McCarthy hearings interspersed throughout Johnny Guitar. Modern critics, on the other hand, focus more on the lesbian subtext, and the apparent sexual tension between Emma and Vienna. Both Crawford and McCambridge struggled with alcoholism during shooting which added heat to that on-screen tension. Crawford’s bisexuality may have also emboldened the actress to play Vienna with a lesbianic edge. Regardless, the movie would be worth watching for its weirdness alone. That it’s also an entertaining Western almost seems like an afterthought.