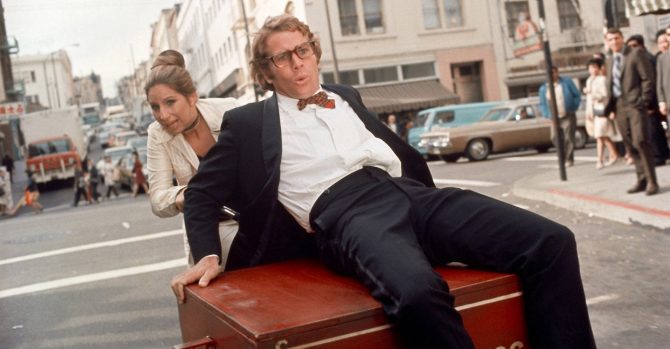 The Screwball: What’s Up Doc?

Barbra Streisand thought for sure What’s Up Doc? couldn’t work as a film, reportedly hated her dialogue and complained to the crew that the movie would be terrible. How wrong she was. Movies seldom get funnier than What’s Up Doc?, and Streisand gave one of her best performances in the film. That says something.

Director Peter Bogdanovich, a man at the apex of his career, saw the comic potential Streisand had as an actress, and formulated this vehicle in the style of Classic Hollywood comedies like Bringing Up Baby. The plot concerns a grifter (played by Streisand) crossing paths with a clutzy scientist (Ryan O’Neal), a wealthy socialite and an undercover government agent at a swanky San Francisco hotel. O’Neal’s scientist falls for Streisand’s grifter right away, and hijinks ensure as mistaken identity, gunfights, courtroom battles and all kinds of slapstick comedy consume the protagonists.

Colorful, whimsical and very funny, What’s Up Doc? is Hollywood comedy at its best. With a cast that also includes Randy Quaid, Emmet Walsh and the great Madeline Kahn, movies comedy rarely gets this classy, or this funny.