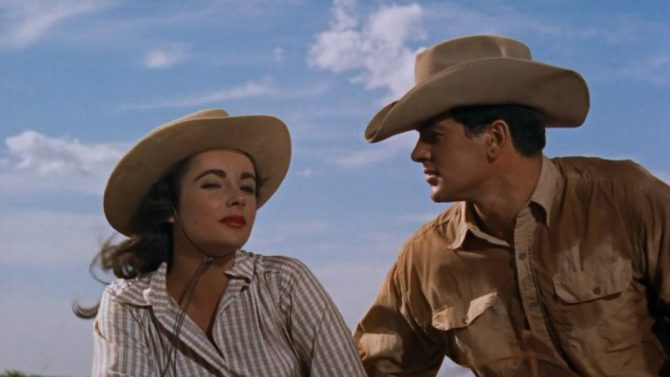 A Queerty reader reached out to us with a request. As a lifelong fan of Elizabeth Taylor, he lobbied for us to include one of Ms. Taylor’s films as part of our Queerantined series. In addition to her status as a Hollywood legend and two time Oscar winner, Elizabeth Taylor also championed LGBTQ rights and became one of the first and most ardent celebrity advocates for AIDS research. Taylor attributed her passion for AIDS to her longtime friendship with actor Rock Hudson, a closeted gay star who died of the disease in 1985.

With that in mind, we offer up today’s film suggestion, which happens to star both Taylor and Hudson: Giant. The film follows the relationship between two young Texas lovers, Bick and Leslie (played by Hudson and Taylor). The two fall in love, marry, have a family, and in short order, get rich. Giant chronicles the highs and lows of the lovers, as well as the racial prejudices of the time. Bick and Leslie have a multi-racial family, which puts them at odds with the rest of their community.

With a cast that also includes James Dean, Dennis Hopper, Mercedes McCambridge and Sal Mineo, Giant plays like a master class in acting. Hudson and Taylor play their characters from the time they are teenagers to old age, and do so very convincingly. Moreover, the two have an undeniable chemistry that underlines the love between their characters. If nothing else, Giant proves that a gay actor can play a romantic, heterosexual lead…and that Taylor & Hudson weren’t just great stars. They were damn fine actors too.