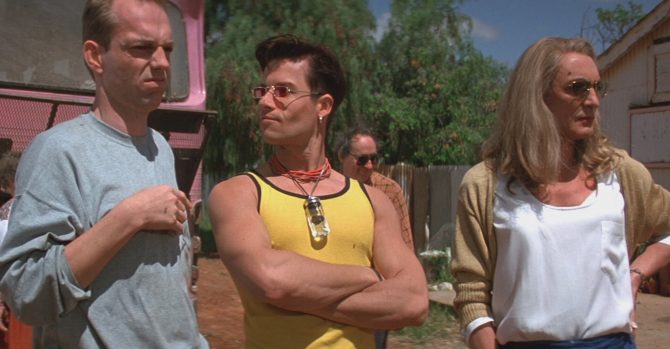 The Classic: The Adventures of Priscilla Queen of the Desert

Her Royal Highness Priscilla needs no introduction. The uproarious Australian comedy which helped make international stars out of Guy Pierce and Hugo Weaving, and which launched Terrance Stamp on a career comeback has become a mainstay of queer audiences and cult comedy favorite. The plot, of course, concerns three burned out drag queens (one of whom is actually a transgender woman) making the trek across the Outback to a new club engagement. Along the way, of course, they run across plenty of bizarre locals, Aboriginies, homophobes and a female stripper that has to be seen to be believed. They also learn the value of friendship and a renewed sense of purpose.

Prisiclla, Queen of the Desert features strong performances all around, especially by Stamp as the cynical Bernadette (Stamp’s casting may be out of sync with modern conventions, but his performance focuses less on his character’s transness than his mid-life crisis). It also features a magnificent soundtrack of disco and dance hits, as well as the iconic, Academy Award-winning costumes by Tim Chappel and Lindsay Gardner, which raised drag fabulousness to a whole new level. It’s exactly the kind of joy to spread during pride month, and exactly the kind of diversion we could use right now.