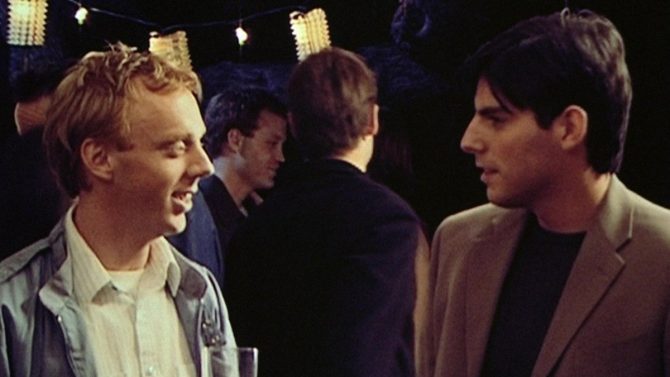 Welcome to Queerty’s latest entry in our Queerantined: Daily Dose series. Every day as long as the COVID-19 pandemic has us under quarantine, we’ll release a suggested bit of gloriously queer entertainment designed to keep you from getting stir crazy in the house.

This gem of a film went overlooked when it played art house cinemas back in 2000. Since seeing it, we’ve made it a point to spread the word: Chuck & Buck is a savage, sexually charged comedy. Queer comedian Mike White wrote and stars as Buck, a 27-year-old whose interests and behaviors more align with that of an 8-year-old. When he reconnects with his childhood friend Charlie (Chris Weitz), he falls hard, following Charlie (whom he calls “Chuck”) back to Los Angeles with hopes of fulfilling his love.

Chuck & Buck has some very big laughs, but more importantly, it confronts latent homophobia in American society. It becomes clear early on that Charlie doesn’t loathe Buck, so much as fear that he enjoyed a gay experience in his past–one which Buck embraces. In addition to providing a subtle script, by turns funny and disturbing, White gives a terrific performance. Oscar-winner Jeff Bridges later called White’s performance of the 2000s. More importantly, though, the dynamic explored in Chuck & Buck is one many LGBTQ people will have experienced. For some viewers, the movie can offer a road map to catharsis, to finally leave childhood behind and embrace adult life as a healthy queer.