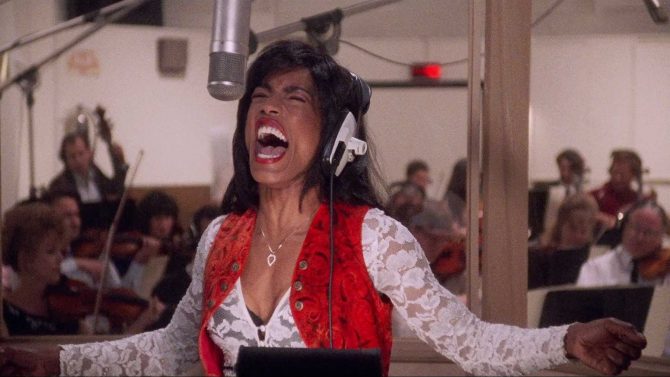 The Rockin’: What’s Love Got to Do With It

Judy. Bohemian Rhapsody. Rocketman. Music biopics have become a fad the past few years, and with good reason: audiences flock to movies where actors get to flaunt their talent in iconic roles, and have some great music to keep the story moving. To enjoy one of the best films in the genre, take a trip with this 1993 gem which dramatizes the life and career of gay icon Tina Turner. What’s Love Got to Do With It scored Oscar nominations for leads Laurence Fishburne and Angela Bassett, who rocketed to megastardom with their megawatt performances. Fishburne plays Ike Turner–a man better known for his wife-beating than his historic contribution to R&B–like a deranged tiger, ready to lash out at any moment. (Fishburne also sings, and sings well, on the soundtrack) Bassett manages to channel the explosive energy of Tina Turner’s stage performances as well as her distinctive speech patterns, voice and movement. If the amazing performances don’t offer enough incentive, the music should, with Turner re-recording her most iconic hits including “Nutbush City Limits,” “Fool in Love,” “Proud Mary,” and of course, the title song. Even the greatest of movies rarely rock this hard.