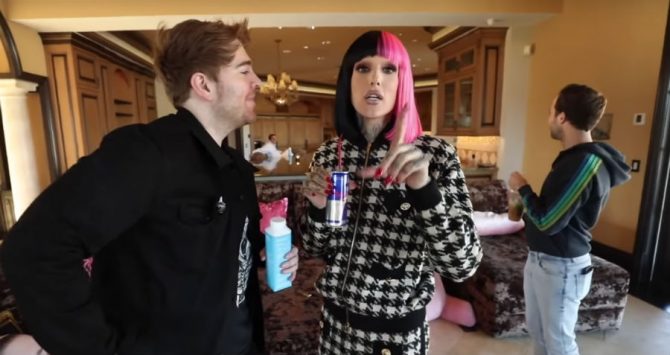 It hasn’t been a great week for Jeffree Star.

First, he got into a public feud with his ex-boyfriend, basketball player Andre Marhold, which was pretty embarrassing for both parties. Now, Insider has just published a damning new investigation into allegations of sexual misconduct and bribery being made against the YouTube star.

The report dates all the way back to Star’s days as a MySpace celebrity in the late 2000s. In one instance, he allegedly used a taser on Gage Arthur, who was a homeless teenager at the time, then invited him back to his apartment, gave him an Ambien, and “forcibly performed oral sex on him without his consent.”

Another time, he allegedly emailed an unsolicited d*ck pic to Chris Avery Bennet, who was 15 years old at the time and running a LGBTQ rights Myspace page. Later, Star sent Bennet, who is transgender, a message saying, “You are f*cking disgusting and nobody will ever take you seriously.”

And then there is the groping.

Zach Neil, a former stage manager from the Warped Tour, tells Insider that he witnessed Star grope “guys and girls” all the time.

“I think anybody that has seen him in concert has seen that,” Neil said. “That’s just part of his thing, feeling people up and groping people and ass-slapping and d*ck grabbing.”

Britain Strah says he was one of those people groped by Star. In 2007, he was working sound at one of Star’s shows when he says the performer grabbed his crotch.

“I was just kind of shocked,” Strah says “After a while it dawned on me that it was pretty f*cked up.”

“When the ‘Me Too’ stuff started happening, all these things that seemed to be smaller transgressions were coming out, and I was like ‘Woah, wait a second, I was assaulted.’ It had never really clicked.”

But perhaps the most shocking part of Insider’s report are allegations that when Star learned about the publication’s investigation into him, he offered the people speaking on the record $10,000 to recant their stories.

“Jeffree has never hidden any of this,” Bennett tells Insider. “The only thing he’s ever done is shut people up.”

Star has long denied allegations of sexual misconduct made against him over the years. He has not yet commented on the latest ones published by Insider.

Related: Vlogger Jeffree Star’s past predatory sexual behavior is finally coming back to haunt him