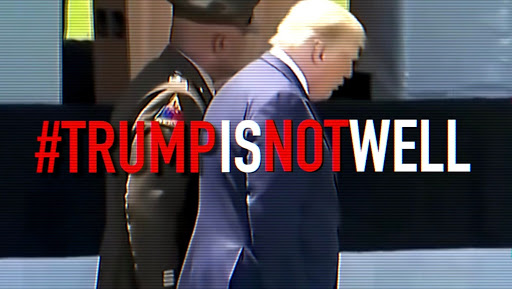 The Lincoln Project, the anti-Trump Republican group helmed by none other than Kellyanne Conway’s husband George, just released a cryptic new ad titled “#TrumpIsNotWell” that takes aim at one of the president’s most sensitive subject: his own health and stamina.

“Something’s wrong with Donald Trump,” a female narrator says at the top of the attack ad, followed by clips of Trump needing both hands to drink a glass of water, struggling to walk, and climbing a flight of stairs with a piece of toilet paper stuck to the bottom of his shoe.

The damning ad, which has received millions of views across multiple platforms, quickly inspired the hashtag #trumpisnotwell to re-trend on Twitter.

But not everyone is pleased about it.

In a Washington Post op-ed, Rebecca Cokley, director of the Disability Justice Initiative at the Center for American Progress, writes that “ableism,” which Trump has been accused of engaging in himself, “hurts people with disabilities regardless of who pushes it.”

Every single professional with a disability I know has been questioned privately and publicly about whether their ‘condition’ hinders their ability to do their job. This is a universal truth and fear for any individual across physical, mental, intellectual, sensory and chronic illness communities…

…Stigma against people with disabilities is real and dangerous. It has serious effects on how people with disabilities are treated in real life, including a steady unemployment rate that hovers around 70 percent, over 20 states that allow child custody to be removed solely on the basis of a parent’s disability, and between 60 and 80 percent of polling places being inaccessible 30 years after the Americans With Disabilities Act.

A person’s ability to use a ramp or drink from a glass of water has no bearing on whether someone can fulfill the essential functions of a job, including serving as the president of the United States.

We always knew the 2020 presidential campaign was gonna be ugly. Why do we have a feeling this is just the tip of the iceberg?