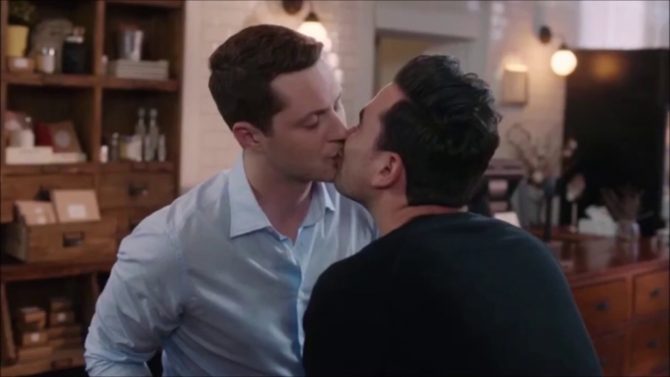 A British fan claimed that the station, 4Music, cut out dialogue that references David (Dan Levy) and Patrick (Noah Reid) sleeping together.

“4Music showed Schitt’s Creek with cut dialogue between David and Patrick. “…to sleep with me or whatever” is just missing,” the viewer tweeted. “But their kiss is there. And episodes earlier talk of Moira sleeping with Roland remains.”

Wondering about the decision to edit certain Schitt’s Creek scenes on @4Music ? Just noticed a scene between David & Patrick and another between David & Jake have been trimmed down. https://t.co/yST09KNI9E

The tweet found its way to Levy, who demanded answers from the network:

“Is this true, @4Music? Censoring kissing and intimate dialogue? Also, I will be retweeting this every day until I get a response,” he wrote.

“Aside from this censorship being highly disturbing and dangerous, it was a big laugh in the scene! This is very disheartening.”

Is this true, @4Music? Censoring kissing and intimate dialogue? https://t.co/TTcLavlsqV

Also, I will be retweeting this every day until I get a response. So…

Footage of the Jake/David kiss having been edited out. Aside from this censorship being highly disturbing and dangerous, it was a big laugh in the scene! This is very disheartening. @4Music https://t.co/7ExmZG9bIO

The sixth and final season of Schitt’s Creek is due to premiere on January 7, 2020.

F*ck yes we did. Shine bright, friends. Very grateful for @poptv and @cbc and their support on this campaign that my teenage self would never have dreamed to be true. ????? pic.twitter.com/FeXqoE8WVv

It Gets Worse
20 comments