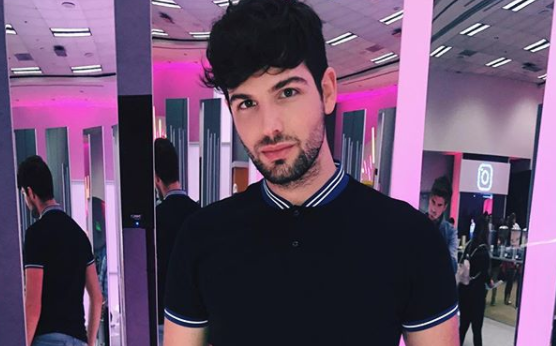 He has nearly a million followers on Instagram, he’s built a career as a social influencer and he just so happens to be the boyfriend of YouTube star Joey Graceffa.

But Daniel Preda wasn’t born into the life of insta-fame, and he didn’t get to where he is today by hawking detox tea and teeth whitener.

During his interview with Hey Qween host Jonny McGovern, Daniel opened up about his early struggles in life and how he worked hard to overcome them.

“I came out at the end of high school and it just wasn’t accepted,” Daniel revealed. “Since I was a kid my dad knew I was different and it was just really hard for me growing up.”

“I actually got kicked out of my house and cut off by my dad. I came out and I basically didn’t have a family after that.”

Luckily for Daniel, he had a place to go. He had been accepted to North Eastern University in Boston with a partial scholarship.

“I moved to Boston, I was alone, turning 18 and it was just difficult,” Daniel explained. “I had like $500 in my pocket and so I got three jobs and put myself through school.”

“I was taking the route of being pre-med, just doing what my parents had wanted me to do and… I just wasn’t happy,” he said. “That’s when I switched to communications and found my true love of radio.”

From there Daniel would go on to intern at The Wendy Williams Show and later at E! Entertainment in Los Angeles.

“The hope is that you stop being just an intern,” Daniel wrote in a 2016 blog post. “Become irreplaceable. Arrive thirty minutes early, and stay thirty minutes late. You will realize that the human mind is able to handle more than what our societal standards says we can. Don’t be scared to work, this country was built on that principle and it’s what employers will look for in a future employee.”

Once in Los Angeles, Daniel began working at a surf shop as well as on campus at UCLA to make ends meet while he was interning at E! And it was during that time that he was introduced to the West Hollywood gay scene.

“It was crazy, I was new to LA and new to the whole gay world because I grew up very Christian,” Daniel revealed. “It was really intimidating and I think I speak for a lot of people that come to Hollywood… you can lose your mind in this city.”

“But I made amazing friends and I think that’s my favorite part of being in the gay community, you find your family. Regardless, there are going to be people out there that accept you and love you for you.”

But soon after being immersed into the party life of his new circle of friends Daniel realized it was time to refocus on his future.

“We’d go out and had so much fun, but three weeks in I was like ‘I’ve got to pay my bills and there’s no way I can keep up going out every night,’” Daniel explained. “So I put all that aside and decided to focus on work and being the best I could be.”

It was at this time that Daniel began quietly dating Graceffa, a Youtube star with 5.5 million followers on Instagram and die-hard fans all over the world.

As their relationship became public with the release of Graceffa’s coming out music video, which Daniel produced and starred in, more opportunities would come to present themselves.

Thus Daniel Preda the social influencer was born. Now, companies flock to work with Daniel to promote their products and brands to his large following.

“Brands will reach out to who’s the best fit for them, it’s not just like ‘Oh you have a lot of followers, we want you,’” Daniel explains. “You have to fit their image, fit their demographic and also I want to work with companies that I actually like.”

But he’s not just taking selfies with products around the world, Daniel and his boyfriend also work with YouTube to produce projects like the popular “Escape The Night” series.

“When I was a kid I was told you need to do one thing for the rest of your life and that never sat well with me, but I was just brought up really old school. So when I started doing what I wanted to do, it really took off.”