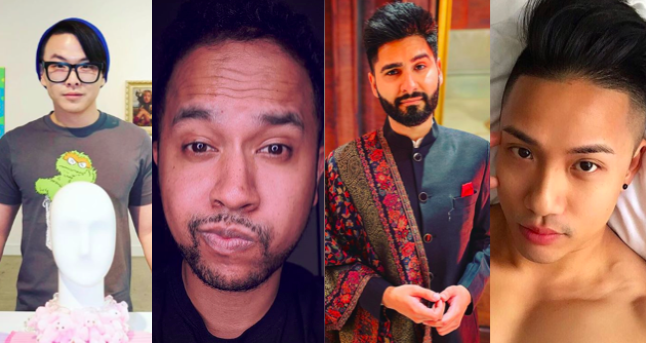 From stereotypes to racial fetishization, seeking romance as a minority in America has its challenges. Especially during this time of year when the season of love reminds us to reflect on our single and partnered lives.

We interviewed four queer Asians about what it’s like navigating love, dating, and relationships in America. Check out what they had to say…

I only love my bed and my momma, I'm sorry ??#Drake

How has it been dating as gay Asian-American?

I would say that it has been difficult. Obviously, if I was white, I would not get the “no Asians” comment, but I found relief in the queer Asian community. I found that I could find a sense of belonging with people you don’t have to explain yourself to. The community helped me find my place and it was a home. Being gaysian in L.A. is a lot easier than being gaysian in, for example, Ohio. Dating outside of your race is easier here, but you do face racism and stereotypes. Even amongst the community, if you date outside of “gaysia,” people do look at you, and ask who are you dating and why.

On the apps, there are profiles with “no fats, no fems, no Asians.” How do you feel about the people who say that this is “just a preference?”

It really comes down to: can you really judge a person off of color or race? There are billions of Asians. You can say that you’re not attracted to this one person, but not attracted to an entire race–that’s just racism.

stole Aladdin’s carpet for this look

When we talk about “Asians” it often refers to East Asians and leaves out South Asians. Why is this the case and what can we do to be more inclusive?

South Asian identity is seen as so different–Pakistan, India, Sri Lanka, Bangladesh, Nepal, and within India, each state is almost like its own little country. There is so much there. From what I’ve observed, from an American standpoint, physically we look different than East Asians, and perhaps that’s why they’ve never been associated together. It’s unfortunate because Asian culture has so many similarities, like family and community. By focusing on what brings us together and what makes us Asian is the way to be more inclusive.

What are your thoughts when people put in their dating profile superficial or racial preferences?

You still see people put “masc” all the time. It’s really unfortunate. You’re already making a pre-judgment about someone based on the color of their skin, their behavior, and the way they act. How do you have a preference against a whole group of people? You can’t cast judgment without getting to know them. Especially with people being very vulnerable, Ii takes a lot just to put themselves out there on the apps, and to take them down from there is just not fair.

What are some challenges you’ve faced dating as a biracial Black and Filipino individual?

When the world looks at me, they don’t see an Asian man. They see a Black man. If I find a white person attractive and I hit them up, most of the time, they will not hit me back up. If I find an Asian person, the same thing as whites, they will also not hit me back up. It’s very much, “stay in your own lane.” If white and Asian people do hit me up, it’s to objectify me and ask for my penis size, or whether I’m hung or not. And because I am Black-presenting, none of the Asian stereotypes fit me. Nobody thinks that I’m going to be submissive or be a small twink.

How do we get rid of intolerance and racism?

Do the work. Doing the work to undo those racial preferences. Being more inclusive with our preferences. Racism is not always pitchforks and Klan-hoods. It’s just a group that is in power that gets what it wants, when it wants it, and leveraging it against minorities.

Growing up in LA one of my dream was to be part of a @coreyhelfordgallery art show! Thank you @hihicaro @sherrijtrahan for making my dream come true ????? The 13th Anniversary group show will be on display at the main space through June 22nd. To inquire about the art, please email [email protected] #onch #chg #coreyhelfordgallery #fashion #wearableart

What are your thoughts on dating and hookup apps?

Dating apps are for the new generation to find love. We have to evolve with it to grow and accept it. Do I think that it is the best way to connect to another human being? Absolutely not. There are some better apps and some more toxic than others. And regardless of the datings apps that you end up using, make sure and be aware of all of the dangers that are out there. Protect yourself, especially with your spur of the moment decisions.

How has it been navigating being queer and Asian here in America?

First of all, everyone knows I’m filled with love, and I love to spread that message, and it’s been a very interesting journey to find companionship. As an Asian-American, our race is turned into a fetish, and when a relationship is based on a fetish, it is often not long-lasting. I feel sad that this happens, but it’s not just me. It’s happened to most of my Asian-American friends. But it will get better because mainstream media has really been showcasing a lot of talented Asians and soon enough it will no longer be a fetish and just be like everybody else.

Due to the way that media had portrayed Asian men in general as submissive, weak, feminine, and nerdy, people that are attracted to Asians will expect that from you. Sometimes when you present yourself as powerful, and not submissive, and not feminine, they will in turn question you and ask you “wait, why are you acting this way?”, which I think is so bizarre. What’s strange to me is that some people truly believe that one race should act a certain way and lacks education.

I wish that the more we speak up about this issue, the more understanding there is with our race and our culture – that we’re all different. We’re all uniquely our own. There is no specific way we should be acting. Just like any other race, we’re all so special.