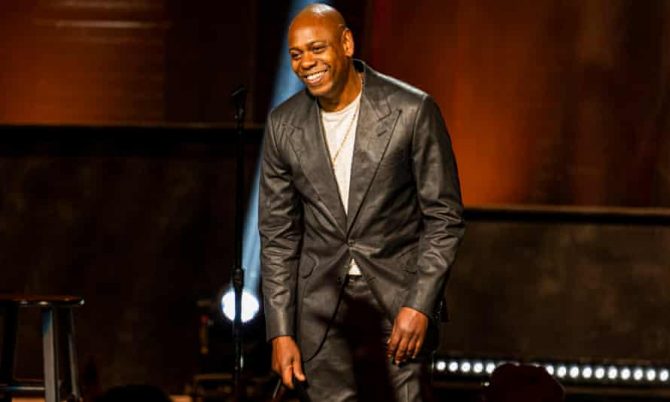 Comedian Dave Chappelle has sparked outrage over a number of queer-themed jokes in his new Netflix special The Closer. In his set, Chappelle criticizes the backlash to rapper DaBaby’s attack on gay people, and makes several ignorant jokes about the anatomy of transgender people.

Chappelle’s targeting of transgender people has invited the most criticism. In the special, he rants that “Gender is a fact. Every human being in this room, every human being on earth, had to pass through the legs of a woman to be on earth. That is a fact.”

“Now, I am not saying that to say trans women aren’t women,” he continues, “I am just saying that those p*ssies that they got… you know what I mean? I’m not saying it’s not p*ssy, but it’s Beyond P*ssy or Impossible P*ssy. It tastes like p*ssy, but that’s not quite what it is, is it? That’s not blood. That’s beet juice.”

At another point in the show, Chappelle seems to preemptively deflect backlash.

“Any of you who have ever watched me know that I have never had a problem with transgender people,” he says. “If you listen to what I’m saying, clearly, my problem has always been with white people.”

At still another point, Chappelle addresses the recent backlash over DaBaby’s homophobic remarks during a concert, joking the rapper “punched the LGBTQ community right in the AIDS.” He also makes reference to an incident where DaBaby was involved in a fight in a North Carolina Walmart in 2018. One person was shot and killed in the incident.

“In our country, you can shoot and kill a n*gg*r,” Chappelle says. “But you better not hurt a gay person’s feelings.”

“If slaves had oil and booty shorts on, we might have been free 100 years sooner,” he says, comparing the LGBTQ community’s progress to the injustice still faced by African-Americans.

Chappelle seems to forget that African-American (or indeed, any non-white) queer people exist. He overlooks the LGBTQ people who have stood with #BlackLivesMatter to oppose police violence against African-Americans (including Patrisse Cullors, a lesbian who co-founded the movement). He seems to ignore the homophobia openly gay African-American men, such as Lil Nas X, face from other African-American men, or how DaBaby’s remarks actually showed hostility toward any gay men in the crowd. Chappelle doesn’t seem to understand the difference between sex and gender, or how his “jokes” about transgender people fuel the very real danger trans people still face on a daily basis by living openly.

Chappelle closes his special by saying he won’t talk about LGBTQ people or issues in his comedy anymore. Is that supposed to be reassuring?

“All I ask of your community, with all humility: Will you please stop punching down on my people?” he asks.

He might do well to stop punching down himself.