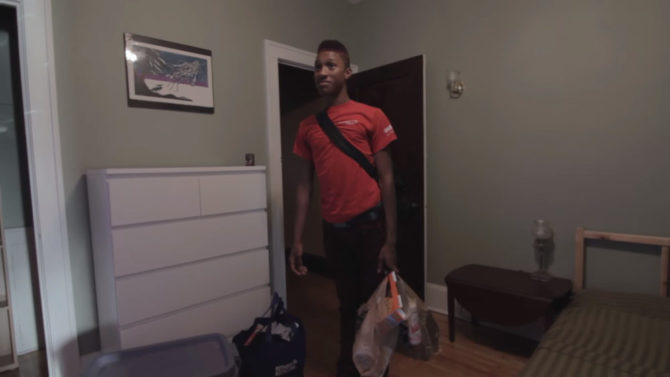 Frameline, the San Francisco-based queer media arts foundation, has a long, proud history of providing a platform for up-and-coming filmmakers to show their work and spark conversation. Now they are streaming a trove of their best films for free on YouTube.

With the Oscars approaching March 4, we’ve taken the time to go back and look at some undiscovered jewels of films now available to audiences via the web. All provide unique comments on the queer experience–some for encapsulating a certain moment in our history, others for finding humor or profundity in gay life. In any case, all deserve an audience, some more than Oscar nominated films.

So, as Call Me By Your Name contends for the top prizes at the Oscars, have a look at some of these little-seen gems that deserve a little glory in their own right…

1. Absence: No Fats, No Femmes, No Asians

As the title implies Absence takes on the age old “no fats, no femmes, no Asians” stigma found too often on queer dating sites. It also examines how femme, Asian and fat queer people find ways to take pride in their bodies, and their identities.

One of the most harrowing documentaries, The Infamous T follows 18-year-old Jonathon, homeless and bullied, over the course of a year. Rescued from poverty and homelessness by the Avenues for Homeless Youth GLBT Host Home Program, Jonathon at last finds a home with queer parents and their 7-year-old daughter. But the spectre of his past life looms large over Jonathon’s life as he struggles with his new home and identity. Ultimately, The Infamous T affirms the power of love and friendship in a hostile world.

Related: Is this the golden age of queer coming-of-age film?

A young Latina girl must face questions over her gender identity after an embarrassing summer kickball game.

A Chinese man living in London finds his world turned upside down when he falls for a neighbor, who also happens to be Chinese. A seemingly trite plot twist actually results in a deeper examination of internalized racism, inferiority complexes and the power of true affection.

Vickie Seitchik directed this 48-minute film as a way of empathizing with her gay son. While the film does detail a number of coming out stories (at the height of AIDS and anti-gay sentiment, no less), Seitchick focuses on the reactions of parents. These parents of queer children discuss how their own emotional and philosophical struggles in accepting their children as queer, and how it has changed their lives for the better.

Few of even the most fervent queer activists have heard of Marsha P. Johnson, which is an utter injustice: Johnson played a key role in the queer rights movement as one of the instigators of the Stonewall Riots. Pay It No Mind tells Marsha’s story through the words of her friends, and through Marsha’s own final interview before her death in 1992.

It goes without saying that AIDS decimated gay men. Brief, plotless, the film packs a loud and powerful punch by capturing the beauty of New York, and the silence of a generation lost.

Writer-director Mark Christopher would go on to make the feature film 54, a movie that flopped on initial release thanks to studio butchery that removed most of the queer content. 54 gained new respect in 2015 when Christopher’s director’s cut resurfaced to a much warmer reception.

Before the 54 debacle though, Christopher won praise for Dead Boys Club, a short film about a young gay man living in New York, haunted by visions of the gay scene in the 70’s, and a generation lost to AIDS. The film shows off Christopher’s largely-untapped gifts as a filmmaker, and offers touching insight into the post-AIDS generation’s fear of sex, and the search for meaning that would follow.

The lesbians got in on the action with this hilarious two-parter, that explains social norms for lesbian dating. It also highlights a little-discussed topic within the LGBT community: for all the discussion of concepts of masculinity and femininity as they relate to gay men and dating, seldom does the same, widespread issue get discussed in terms of women.

Though western civilization has a nasty history of hating, Native American culture has long embraced our community. In Native American tradition, gay men, lesbian women and transgendered people are known as “Two Spirits,” special semi-divine people who link the physical world with the spirit world. Two Spirits further elaborates on the queer Native American subculture, and the acceptance—even reverence—American Indians had for Two Spirits.

A fascinating glimpse into Native American culture, Two Spirits holds just as much interest for queer folk searching for their history.