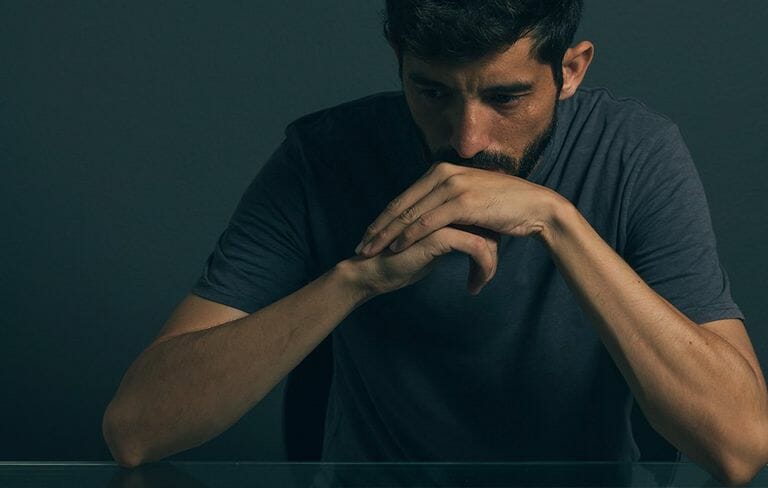 It’s never easy writing about depression: I should know, I’m writing this piece. The last time I suffered a bout it was a perfect storm of older man issues hitting at once: finances, aging, weight, looks, being single, the health of my mother.

And then the world…

I couldn’t read the paper, I stopped eating (then started binge-eating), had no interest in the gym or pastimes likes hitting the movies or hanging out with friends. Sex lost its luster. My bed became my best friend, that place where I could still sink into a pillow and dream, where I didn’t need to dress or shower or fake interest or a smile. I looked forward to nightfall.

Many of the Daddy Issues I’ve covered in the past have focused on more surface-related issues, like how to enjoy sex after 50 and why it’s wrong to insult a Twink. But, as my older gentlemen friends know, there are darker matters involved with aging, and they can’t be resolved in Cosmo-quiz-like fashion.

Depression hits approximately 10 million people a year, and it’s estimated that 15 percent of the adult population will have an episode of depression during their lifetime. Gay men are three times more likely than the general population to suffer from depression. As such, they are also more prone to suicide.

Knowing the statistics about depression is helpful, acknowledging the illness, imperative, but what to do about it? That’s the next step. Seeking medical attention might be necessary, but you also need to fight from the inside—with a little help from your friends.

“We know why depression hits older men,” says Keith Bernardo, a psychologist in Virginia. “The loss of any sort of personal agency. People’s careers end, they retire, they lose a husband or a spouse; their sense of purpose goes away. There is often hopelessness that sets in. That’s a keyword for depression.”

Truth is, all the issues I was dealing with are common for men in my age group. And there are more to come. That’s why, holistically speaking, it’s vital to open up about depression. As with all psychological illnesses, there tends to be a need to hide depression, to push it aside, to pretend we’re always as peppy as our Facebook page would suggest. In the long run, denial only makes depression worse.

Says Bernardo: “One of my pet peeves is that even the smartest among us see depression as being weak, or ‘it’s just thoughts,’ or ‘just suck it up,’ or ‘it will pass.’ That’s just not true. It’s not simply ‘pull your thoughts together.’ They like to say they’re just not Oprah-ing their way out of it.”

Once you open up to people about your struggle, you’ll more than likely find they’ve experienced similar problems and are happy to share stories, offer advice, and lend an emotional hand. It’s therapeutic for both parties.

“When patients are at risk, I look for subtle changes in cognition,” says Bernardo. “Lethargy, a slight disengagement, loss of interest. Once depression takes root it’s a really unpleasant circumstance.”

Whereas I used to keep my depression hidden behind a smile and, too often, self-medication, I now make sure it’s out in the open, shared, another part of me that I need to embrace.

“Make sure you have social support,” adds Bernardo. “Social isolation isn’t just a symptom of depression; it’s a cause.”