And it’s so true!

The raging hormones, the blazing sun, the more than occasional mood enhancers, and the desperate breakout from lockdown make it a sexual paradise, but not one where commitments are always remembered when the sun comes up and the privates go down.

So screw all that.

I’ll just keep going there to find some fab drag queens to make me giddy in my singlehood. And the best time to do that is the annual (except for last year) Invasion of the Pines, whereby a boatful of gussied up tuckers floats in from the neighboring Cherry Grove to ritualistically undo an age-old incident where drag queens were refused service by exclusionary Pines gays. These b*tches really hold a grudge!

Amazingly, I was available all three days. The rescheduling is why the host of the festivities, Shequida, announced to the crowd, “Happy Fourth of July–one day later! Drag time!”

As some dizzy queens scurried to board an outgoing ferry en route back to NYC (A lot of Pines shares end Monday at noon), the Invasion pre-show began, with local legend Rose Levine belting “We’ve Got A Lot Of Living To Do” a cappella and full-throated Seth Sikes singing “Glory, glory hallelujah, the queens are marching on” with a Judy Garland-ish warble.

When a new queen named Tina Twirler did runway on the pier, Shequida gushed, “She has the waist I had before covid!” Cable queen Robin Byrd bravely did runway too, despite having slipped and hurt her foot. And whenever people weren’t cheering enough for anything going on, Shequida would say, “They didn’t fly me in from Europe for that response–and by Europe, I mean New Jersey.”

The drag boat docked, and the gals disembarked, with an emphasis on barked. MC Pansi kept referring to their woofy looks, especially as seen in daylight. About the rather unusual Zondra Fox, she said, “She was on the Titanic. That’s why everyone jumped off—not because of any iceberg.” But I thought they were all gorgeous and funny, if not necessarily husband material.

The second best drag name of the day was Shitinya Panties. But the finest by far was Delta Variant, a stunning gal who looked positively contagious. I spent the rest of the day trying to find her in the Pines, only to run into some other queen who claimed to have originally been called Delta Variant.

“You should have copywritten the name,” I advised, not even bothering to ask what his current nom de plumage is. (Probably Astra Zeneca.) I needed to find the new Delta Variant! And a husband! And I don’t mean the bearded man who was cruising the Meat Rack (the dunesy area between the Pines and the Grove). I need someone who’s gotten the memo that people stopped doing that there in the ‘80s!

By the way, thank you to PJ McAteer for granting me press entrance to his Pavilion and other properties. (That was extra valuable because they were charging that day, to make up for last year.) And the best gossip floating around, along with all the tucked weenies? A Drag Race winner who broke up with her boyfriend is now on Grindr and is none too happy when tricks come over and recognize her. The price of fame! She’ll never get a husband! 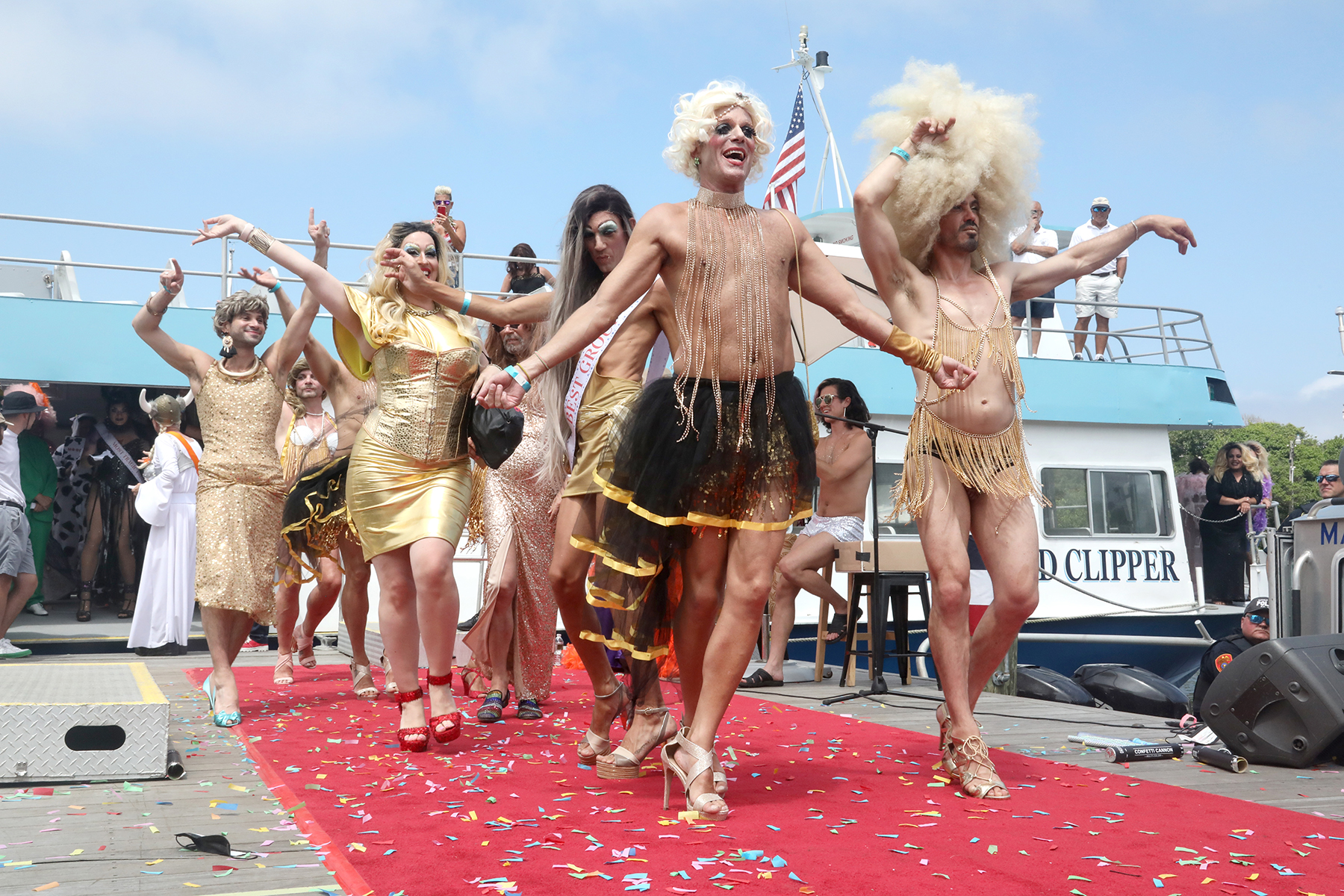 “Did I see you at Battle Hymn last week?” a guy asked me at a party, referring to the regular gay bash in Chelsea. “Yes,” I replied. “Did you get stripped?” was what I thought he then said. “No! I wish!” I answered. But he had actually said, “Did you get strep?” “Ah. No. Did you?” I wondered.

“Yes,” he nodded. “What did you do to get it?” I asked, innocently. He simply smiled mischievously and waked away.

In happier news, gay writer Dan Avery is moving to Tulsa for a fancy writing gig….At Riis Park beach in Rockaway, New York, there’s generally a whole section of trans men in Speedos these days. It’s a fab new world….But back to the dance floor: The Roxy was a skating rink, then a music club, then a ‘90s gay dance phenomenon where I spent many a Saturday. Well, the owner, Gene DiNino, is writing a memoir about riding high as a nightlife king, then hitting hard times when the Roxy closed and living in the shuttered club for two years without water or electricity! I never wanted to leave the Roxy either, but I felt for Gene’s plight and think this is the kind of cautionary tale I need to absorb, not some fairy tale about keeping a husband!

It Gets Worse
35 comments