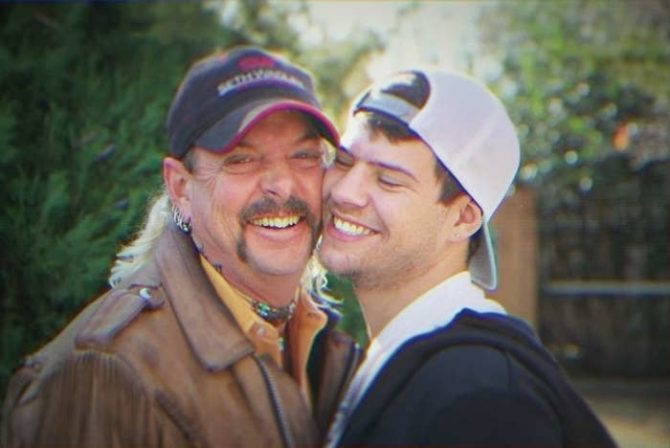 Joe Exotic‘s husband Dillon Passage held nothing back when pressed for details about his relationship with the convicted felon on Andy Cohen‘s Sirius XM radio show this week.

Passage described Joe as a “genuine and a good down-to-earth guy.” He explained that the two met on Grindr in 2017 when he was 22 and addicted to prescription pain pills.

Related: What to Watch: Just in time for quarantine…a very exotic story of tigers, murder and gayness

“I was in a really bad place in my life ,” he recalled. “I was going through a lot of things. I was an addict, and being around the animals kind of gave me a purpose. It brought me out of my depression. It was my own little rehab.”

Two weeks later, they were married.

“We definitely jumped the gun,” he said, “but I’m not ashamed of it whatsoever.”

Godiva is the coolest cat ever

As for their sex life, Passage, who likes men and women “both equally,” told Cohen that Joe is neither a top nor a bottom.

Then he confirmed he, too, is versatile, but that he’s not into S&M.

“We actually never did anything like that, and he never asked me to either,” he explained. “I knew he had done that in previous relationships.”

As for Joe’s Prince Albert piercing, Passage described it as a “small padlock” which he asks his husband to remove before sex. And doesn’t allow big cats in the bedroom when they’re making love either.

Passage, who now works as a bartender in Florida, also revealed that Joe was in quarantine in a federal prison, after being transferred from a facility where several inmates tested positive for coronavirus. This lead to reports that Joe, himself, had the virus.

But a post on the Tiger King star’s Facebook page later clarified that this is not true.

“Joe DOES NOT have the COVID-19 virus, he’s in a 14-day quarantine because he was transferred from another facility,” the post stated.

“I do love Joe,” Passage told Cohen. “He’s been there for me through my darkest times, and I’m not just going to dip out and abandon him when he needs me most.”

Listen to Passage’s full interview below.