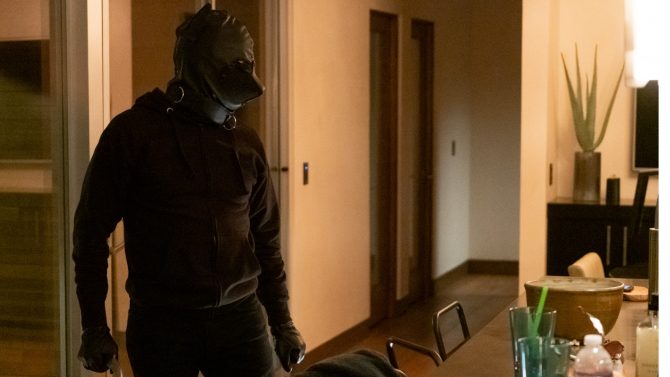 The path to becoming a filmmaker often takes detours. For Carter Smith, the road to Hollywood led through the world of fashion. Having grown up in Maine, Smith first enrolled in the Fashion Institute of Technology before finding his true calling with photography. After a successful career as fashion photog and directing commercials, Smith tried his hand at storytelling with the 2006 queer-themed short film Bugcrush. Positive notice led to a job directing the horror feature The Ruins in 2008.

Now Carter takes his next big swing: a synthesis of horror and queer sensibility in Midnight Kiss. The film arrives as part of Hulu’s new Blumhouse horror anthology series, Into the Dark. The film stars Scott Evans as Joel, a gay man who journeys off to Palm Springs with his friends to celebrate New Year’s Eve. But a series of bizarre notes hint that Joel’s past has come back to haunt him, and a killer is on the loose.

Midnight Kiss streams on Hulu December 27. Queerty tracked Smith down for a chat about the movie, its sexy story, and his approach to horror.

It was super traditional – the script cam to me through my agent. When I read it I immediately knew it was something I wanted to make. It’s the horror movie I wish I’d had as a young kid growing up.

Was it already locked when you signed on? Did the two of you collaborate to shape the script?

The script was changing constantly. My “directors pass” on the script was done in just a few days and because of the compressed timeline – needed to encompass a bunch of substantial story changes that came up as a result of our table read. Luckily Erlingur and I were able to work together for most of the process. 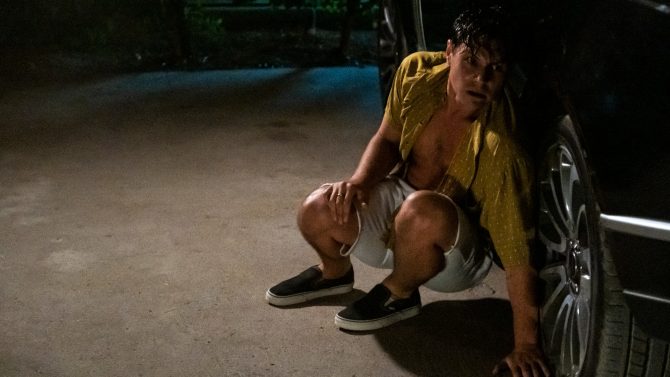 This is the kind of film that looks like it was great fun to make. Your cast has excellent chemistry. Did you audition them together?

I didn’t actually get to read with them all together. Everyone had put themselves on tape and I had to sort of imagine what the group dynamic would be like. Things can potentially go pretty wrong when casting like this but I feel like I hit the jackpot with this group of actors. All of them are so talented and wonderful together. They fell into a familiar easy rhythm almost immediately.

How do you go about building a rapport with them, and encouraging them to build relationships to get the kind of familiarity they need in a piece like this? As soon as we locked in cast I just tried to spend as much time as possible with them. In the costume fittings. I brought them on location scouts. Carpooling back and forth to set. Any chance we had. Luckily they were all local in LA and a couple of them already knew each other.

In an atmospheric piece like this, what kind of mood do you keep on your set to stimulate your cast & crew?

On the more intimate scenes you obviously need to make sure the actors are comfortable with everything – but for most of our shoot, the most pressing issue was our crazy timeline. We had 16 days to shoot this film, which is packed full of stunts and practical effects and complicated crowd scenes. I feel like the most important thing is to just make sure you bring a sense of efficiency. You have to know exactly what you need from each setup. And you need to be realistic about how you go after getting it. If you aren’t clear about both of those, you’ll start to find your days (and your cast and crew) slipping away.

As with many horror films, this one walks the line between terror and outright comedy. That’s hard to find. How do you approach doing so?

I don’t consider myself as being very great at comedy – but it was there in the script and with such talented actors bringing these characters to life it just happened naturally. The relationship between Hannah and Cameron (Ayden Mayeri and Augustus Prew) is one full of intimate shorthand and inside jokes. In their scenes they knew they had the freedom to stray from the words on the page – and we could probably cut an entire other movie from their hilarious improvs. The comedy also acts as a nice counterpoint to the more horrific elements of the story. Finding that balance really doesn’t happen until you’re in the editing room. Luckily my editor [Thad Nurksi] is a gay guy with a wickedly dark sense of humor that matches mine. 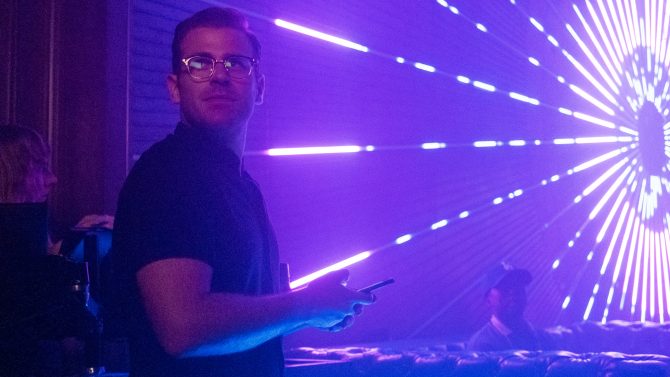 I don’t often feel compelled to ask a director about something as technical as lighting, but you have an eye for flair. The club scenes are lit with mostly blue and orange light, and it’s a very dark scene, but we’re able to see what’s happening. When you’re on a tight schedule and budget like this, how do you go in prepared to shoot?

One of the biggest factors in choosing the club location was how it would look when it was lit. Our club had an incredible built-in system where we could dial in any colors we wanted instantaneously. From the beginning, I knew I wanted a sort of bluish-purple look for the dance floor and a darker, fleshier brownish light for the back room.

You’re someone that got into Hollywood as, I believe, an out gay man. You’ve directed a number of queer-themed films. Have you ever felt labeled by the business as a “gay director?” Do you feel it’s affected your career?

My first short Bugcrush was a queer horror story. I was pretty surprised that so many people responded to it as strongly as they did – and not just gay people. After Bugcrush I did The Ruins for Dreamworks which wasn’t really gay at all. I did consciously make the choice to make a “horror” film as my first feature (as opposed to a “gay” film) because I wasn’t sure if I wanted to be labeled. These days – I love the specificity of being called a “gay horror” director! There are so many scary stories (with queer characters) that I’d love to tell.

I’m writing a few things. I’m still shooting lots of pictures in my “other” job as a fashion photographer. Most exciting is that Erlingur and I are working on cooking up a new project together!

Into the Dark: Midnight Kiss streams on Hulu December 27.