Jeremy Hersh is a man with a lot on his plate. After years of laboring to produce short films, Hersh’s first feature, The Surrogate lands on VOD this June 12.

A graduate of New York University, Hersh wrote and directed The Surrogate. The film tells of three friends Jess (Jasmine Batchelor), a young web designer, her best friend Josh (Chris Perfetti), and his husband Aaron (Sullivan Jones). After years of discussion, Jess agrees to act as a surrogate for Josh & Aaron. The couple has their dream shattered when prenatal tests reveal that the baby has Down Syndrome. As Aaron and Josh debate if they should terminate the pregnancy, Jess begins to wonder: what is her obligation? What if she carries the baby to term on her own? What begins as an exercise in sweetness becomes a moving story of characters wrestling with philosophical questions that may not necessarily have right or wrong answers.

The Surrogate earned raves at the SXSW Film Festival earlier this year, and we caught time with Hersh to discuss the origins of the film, writing a pregnancy story as a gay man, and the moral questions the film confronts. The Surrogate lands on VOD this June 12.

Congratulations on the film. How are you doing in these uncertain times?

That’s so kind of you to ask. I’m totally fine, and lucky.

So this is your first feature as a solo director. Where does the story of Jess come from?

It’s something that just kind of came to me. It came from wanting to explore the archetypal relationship between a straight woman and a gay man. Growing up that was the only kind of queer representation I would see. Will & Grace, Sex & the City, you know? 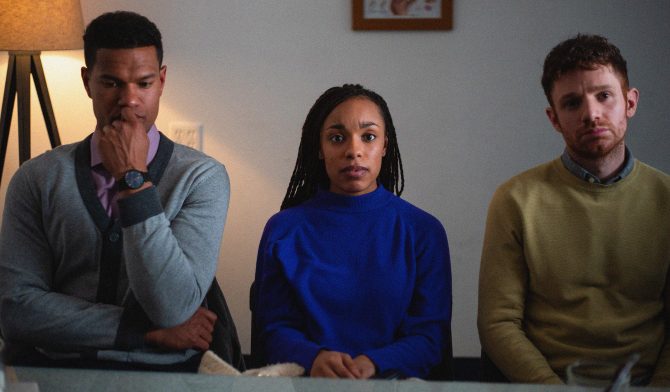 It’s often portrayed in this unrealistically positive way. I know a lot of people are interested in positive queer representation. I’m much more interested in interesting queer representation: something that shows dimension present in any real relationship. So I started with that. Some of what Jess ideologically comes to in the film—rejecting part of New York that she’s a part of, and that a community which supposed to be progressive has major blind spots, including the way we see disabled people—comes from my own experience of coming to New York the first time. I went to NYU. When I was a freshman, I had high expectations of how progressive an environment it would be.

In some ways, it lived up to that. Queerness was extremely normalized. But it also was an environment where I had two professors casually use the “r-word” in a way they thought was funny. Also, in some ways [the city] is designed to keep out disabled people. There are still so many places where you have to go upstairs to enter, including our public transit. So that was something—the frustration Jess expresses about that is autobiographical.

How about surrogacy itself?

I started just researching surrogacy and reading about the advances in prenatal genetic testing. You can find out so much in the first trimester than you could even just a few years ago. The more I read on the topic, the more I put into the story. I also pulled from my own experience of chosen family drifting apart.

I thought of Jess & Josh at the same time. Then, once the story started to progress in my mind, I just thought that the surrogate journey was more interesting. Jess grows more, so it made sense for the story to center on her.

You’re a queer man. One of the questions I think a lot of viewers will have when approaching this story is how can a man write about what’s essentially the plight of a woman?

I read a lot and talked to a lot of people who have been surrogates, or people that work with surrogates. For example [I talked to] one psychiatrist who specializes in reproduction. I started in 2013 and then kept researching all the way up to the day before we started shooting. 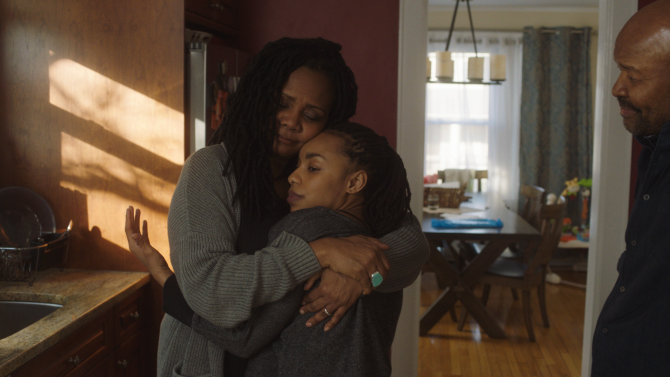 Our lead actor is a woman, so just in general I always hire actors not only to do what will eventually be seen on screen, but also as a co-author of the character. So I told Jasmine, as much as possible, that she should feel in charge and that if anything in the script didn’t feel accurate, to paraphrase or take it out in a take.

Do it, and if it doesn’t work, we’ll try it as written. There’s a limit to how much an actor will change something because they don’t want to mess up a scene partner. I try to empower the actors to make it easy as possible to have a voice, and to surround myself with as many women as possible on my team. Our cinematographer and costume designer are both women, and both parents. It felt good to know that if anything felt inaccurate, they were there to perfect that.

It helps of course that you have an amazing actress in the lead, Jasmine Batchelor. She’s very good here. What kind of contributions did she offer to reshape the character?

Josh’s background of being Jewish and having a family that died in the Holocaust, that’s based on me.

Oh interesting. One thing I noticed about your style is how you like to use long takes. Several scenes—for example, the scene in the coffee shop—they play in one. No cut. How do you prime your actors?

We conceived of the cinematography as all hand-held because, and also, the lighting and production design, the sound—everything was 360. 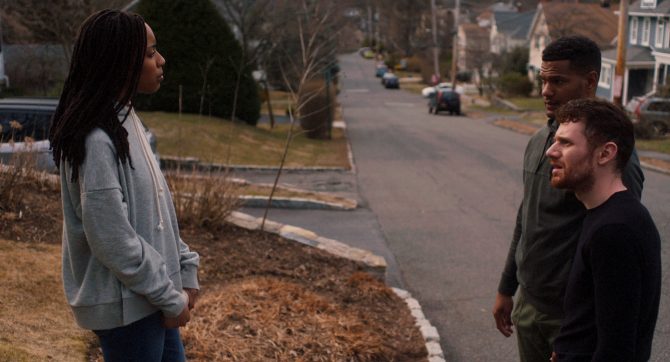 So we tried and mostly succeeded to make it so no part of the play space is off-limits, and if an actor has the impulse to move, the camera follows that. The camera adjusts to the actor, not the other way around. We didn’t have much rehearsal time, and the little time we had, we mostly just used to build chemistry between the actors who had just met. So we did improv. I really wanted the actors to have full control in terms of choreography. There’s still some extent to which a director needs to come to the table and say “Here’s the choreography.” But that how we learned what to change.

Part of the choreography is also the person holding the camera, our cinematographer. So we would do one or two rehearsals just so she could watch it, and we’d get her involved too. When we’d do the first take, it was very much us figuring it out. I like the vibe, the immediacy of the viewer seeing the DP figuring something out in real-time. One thing we talked about a lot early on was the idea that early in the film when all the characters are on the same page, all three fit comfortably into the same shot—like they’re comfortable physically. As the film goes on, there’s this distance between them metaphorically and literally. The camera would have to move around to fit the different characters into the same shot.

You also work with some children with Down Syndrome here. How does that make you alter your approach?

We didn’t have much rehearsal time with Leon [Lewis, who plays Leon, a child with Down Syndrome] as I wanted. It was very much improv. The way his parents and I approached him was to say it was just like playing house. Pretend. And he was like got it. So we tried to reduce restrictions. We didn’t tell him he couldn’t get up from the table. It was like, if he gets up, follow him. We just set it up as games, which it is for adults too. 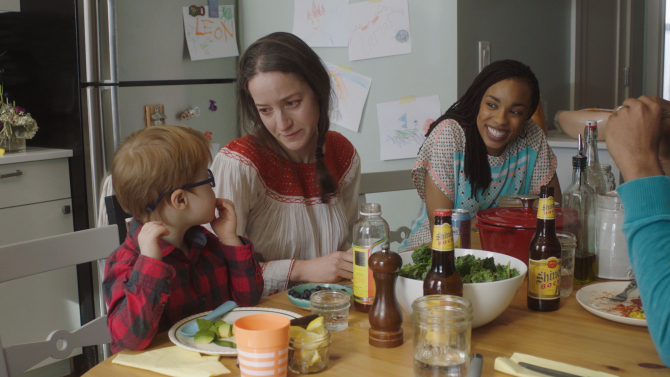 The dialogue was mostly improv. Then, the scene in the community center [for people with Down Syndrome], we shot like a documentary. I realized the adult actors who were supposed to be teaching yoga, for example, should actually be teaching and engaging the kids. We shot with two cameras going at once. I’m also in the scene, so I could walk over and give our cameraman notes, and then blend back in the crowd. Those families are people that I’ve met volunteering at a center that caters to families of people with Down Syndrome, so I know those people really well.

At its core, I would argue this is a film about intersectionality, and how life perspectives overlap…or don’t. A lesser film would have made the movie all about abortion, or the dangers of surrogacy, or the difference between men and women. Yours takes all of these elements and just says: it’s complicated.

That’s one of my favorite films!

Right on. So how do you go about keeping yourself even-handed with your characters? Nobody in this story is really wrong…

I try to believe everything that everyone in the film says. I really think about finding a way to agree with what the say. The central characters—I really don’t know who’s right. That’s why this is interesting material for me. I do think I notice in my writing when something is too stacked against one character or another. A huge thing also is to hire really good actors. They can make any character empathetic and relatable. 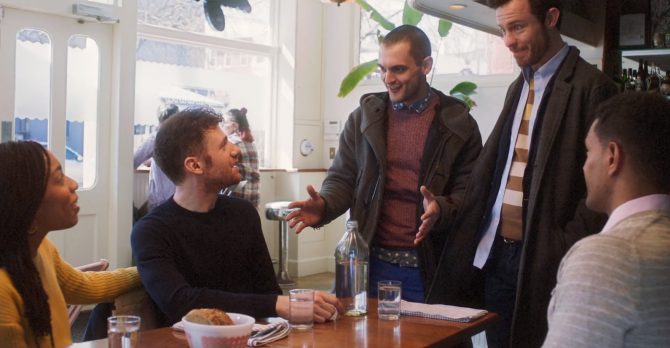 So this is your first feature, and I love to ask this question to first-time directors: what did you learn about yourself in the process of making the film?

That’s such a good question. This is kind of a boring, logistical answer, but early on, I didn’t think of myself as a producer. I don’t know how to fill out a spreadsheet! I don’t know how to do taxes! And I realized that I already had the talent of getting people excited, and knowing who to hire and I’m able to have relationships with amazing department craftspeople. I also realized I can do a spreadsheet or taxes if I need to. So at a certain point, I realized there were producing tasks I needed to do and could do. Before the movie, I just thought of myself as a creative. Two years ago, I never thought I would sign up for producing someone else’s movie, but now it’s something that is now exciting to me.

I also realized that saying the phrase “I don’t know” and being honest about that is the most powerful tool as a director. It’s essential to be vulnerable and not have a system where you’re a dictator, and to defer to other people’s expertise.

I have two features that I’m in the process of writing. Both are in the early stages. And I have a few plays that I’m working on. Theatre is also an interest of mine. Both movie scripts and one play I’m working on are period pieces.

And how will you celebrate pride this year?

I’ve been going to marches that have been happening in New York that are anti-police brutality. I plan to keep doing that and be gay at those.