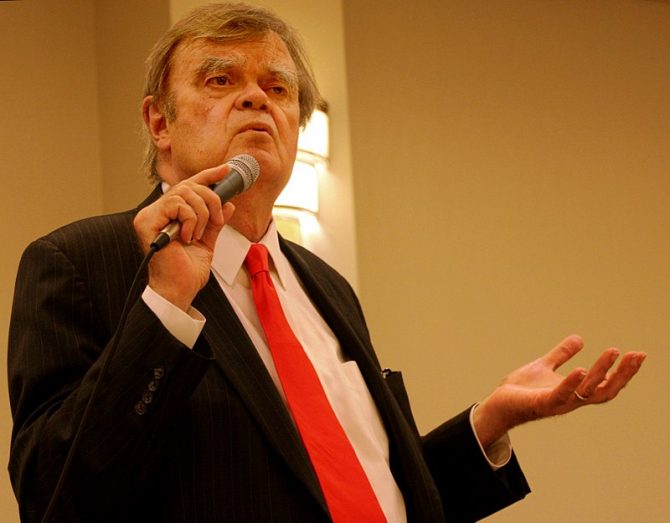 Former radio host Garrison Keillor published a Facebook post this week in which he suggested Democrats should give up fighting “culture wars” about things like LGBTQ equality, women’s rights, and universal healthcare because, as a straight, white, male millionaire, he’d rather talk about tax policy and the economy.

While opining on SCOTUS nominee Amy Coney Barrett, the 78-year-old said Tuesday that he believes she’s going to be confirmed and that Roe v. Wade and the Affordable Care Act will be overturned and homosexuality will be criminalized and that’s OK with him because those issues have poisoned American politics so maybe it’s better to just give up and admit defeat.

Did we mention that Keillor is a Democrat?

“It seems clear that Judge Barrett will sit on the Supreme Court and this will mean the reversal of Roe v. Wade and some deep dents in the Affordable Care Act,” he wrote, adding that he doesn’t think these issues are “worth fighting for anymore” because they have “torn the country asunder.”

“We can accept a system of states’ rights, whereby abortion is legal in some states, illegal in others, same as you have a death penalty in some states, not in others,” he continued. “Let South Dakota be South Dakota and if they wish to criminalize LBGTQ, then they can deal with the consequences. Let’s give the cultural war a rest and focus on the economy and tax policy and environment.”

The post has since been deleted, but City Pages managed to get a screenshot before it was taken down. 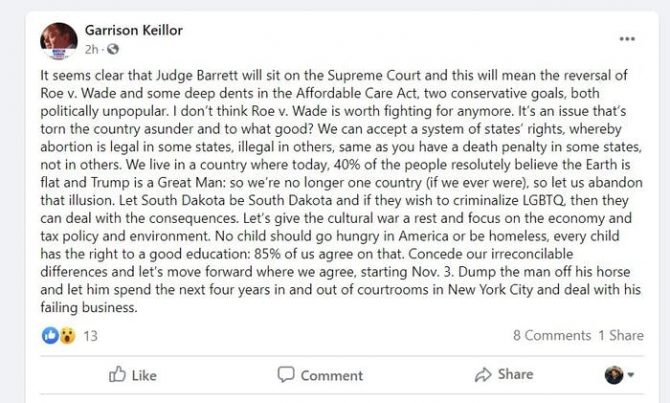 This isn’t the first time Keillor has made problematic comments about LGBTQ people.

In 2007, he wrote a column criticizing gay parents, who he said were “sardonic fellows with fussy hair who live in over-decorated apartments with a striped sofa and a small weird dog and who worship campy performers.” He later apologized for the column.

After deleting his original post on Tuesday, Keillor published another one sarcastically claiming his Facebook page had been “hacked by some fool expressing his ignorance of political issues and using my name.” Then, borrowing a page from Donald Trump‘s playbook, he said he wasn’t responsible.

“My Facebook page has been hacked by some fool expressing his ignorance of political issues and using my name,” he joked. “I am not responsible. My wife Jenny is in charge of politics in this household and she strongly dislikes Judge Barrett and so that is my opinion too. I shall now go back to writing my novel.”

My Facebook page has been hacked by some fool expressing his ignorance of political issues and using my name. I am not…

In 2017, Keillor lost his longtime gig as host of A Prairie Home Companion, the wildly popular weekly radio variety show that had been on the air since 1974, as well as his weekly column in the Washington Post after he was accused of “inappropriate behavior” by at least two female colleagues, including propositioning them for sex and unwanted touching. Later it was reported he tried paying one woman $16,000 for her silence but she refused to accept the money.

Keillor responded to his 2017 firing by saying “the country is in the grip of a mania” around the issue of sexual harassment in the workplace and that “I wish someone would resist it.”