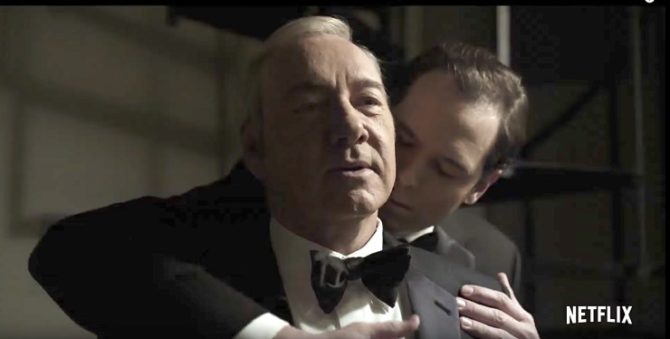 PsyGuy98 has been watching Netflix‘s recently released season 5 of House of Cards, as there’s no better way of escaping our current American nightmare than by diving headfirst into another, fictional American nightmare. Oddly enough, that logic somehow works. Need we say more than Robin Wright? She’s perfect, let her do her thing.

But there’s one plot line that PsyGuy98 is not down with, and it involves sexual ambiguity, the kryptonite of the American psyche.

And while we’ll give him credit that he doesn’t come off like a raging homophobe like this guy complaining about Sense8, his argument still doesn’t hold much weight here:

“Why is gay Frank Underwood a thing, and why do they keep bringing it up?” he asks.

They keep bringing it up and I don’t really know why. It serves no purpose. It’s just something that the writers bring up every now and then to remind us that he’s gay/bisexual. I’ve heard the argument “it’s because he’s a man filled with secrets.” but I think he has plenty of secrets. Secrets that are actually relevant to the plot. Frank and Claire are doing too many important things that we don’t need a side plot where he forms a relationship with his trainer. Just seems like filler to me.

Commenters were quick to provide some key points:

Absolutely not. Remember the Oscar Wilde quote frank says in the beginning about sex being about power? Look at all the times frank has gay sex, it’s always when he is out of control of a situation and then wins and needs to gain back his feeling of being in control. It’s his way of stabilizing. After the Medicare bill passed, after inauguration. Both were hard fought wins and he is unwinding after.

And then there’s the even more obvious “character development” argument, because why would audiences care about the show without feeling like they really know these characters? Otherwise it’d be like watching CNN and nobody wants to do that:

There is a fine line between a filler and a subplot which works as character development.

One of the central plots is always the relationship between Frank and Claire. Ever since the ThreeChum their sexual relationship / preferences has been a part of the show and that’s okay, if you ask me, because I want to see the whole picture, everything these two do.

This commenter definitely deserves a “psy” in their handle. We request PsyGuy98 hands over his prefix immediately:

The writers don’t include these scenes because they want you to ponder his sexuality. You can have bi / gay characters being themselves onscreen without their sexuality being the point. The show is very concerned with his twisted worldview and the nature of power. Frank and Claire’s power is affected by what they choose to display to the world, and what they choose to hide.

Frank is with women for more practical reasons, and with men for more personal reasons. He and Claire have a very intimate relationship, but they are business partners as much as anything. Zoe is a tool, and sex is misdirection from his true motives. Mentions of his old friend from school engender a deep emotional response from him. The guys he’s with always tap into some emotion of his. He connects with them in brief and pathetic ways, and they are always hidden.

And then there’s this read, voted to the top of the page, which we will post without comment as we sip our Lipton’s Green Tea with Mint:

At this point it really is all just filler.