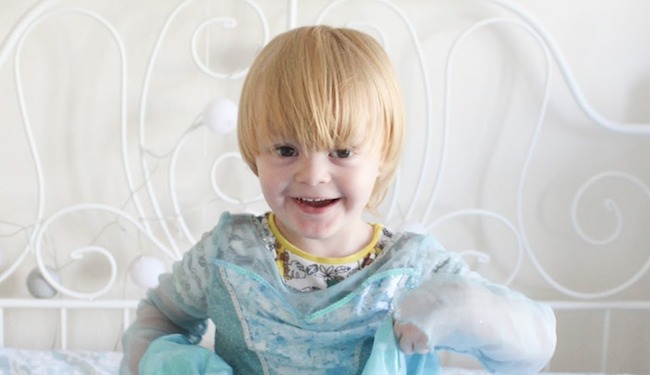 Disneyland may need to rebrand themselves “The Unhappiest Place On Earth,” as they’re currently doing a brisk business in shattering young children’s dreams.

Although a three-old-boy named Noah was conspicuously “buzzing with excitement” upon learning that Disneyland Paris was offering a “Princess for a Day” Celebration, he nonetheless found his fantasy Day of Beauty crushed by the powers that be in the magical kingdom.

In no uncertain terms, they outright forbid him from being glamorously made over as Snow White, Cinderella, Elsa from Frozen (his personal fave), or any other cartoon princess that might tickle his fancy.

Related: How this five-year-old boy reacts to his older brother coming out is pure perfection

Hayley McLean-Glass, mother of Noah, took her outrage to the blog Sparkles & Stretch Marks, writing that she was shaken up and quite saddened by the decision.

She reveals she tried in vain to make the booking, but received a curt email that said, “At this time it is not possible to book princess for a day for a boy.”

“So let me get this straight,” she writes.

My son, who fell in love with the concept of Disney Princesses at Disneyland, is not allowed to have the same experiences as the little girls who visit you simply because ‘He’s a boy?’”

“I just think that it’s unfair,” she told ITV News.

“I mean if there was an activity such as a pirate dress up or a Spider-Man event, little girls would be allowed to do it.

If anyone told a little girl that she couldn’t do that there would be absolute uproar, but I just don’t understand why it’s different for a boy.”

Unsurprisingly, after the incident made the news, Disneyland Paris quickly reached out to say sorry to McLean-Glass, and make sure their stance on the issue was understood:

Thankfully, Disneyland have now contacted us to confirm that the response we received is not reflective of their policies and have promised to update all of their staff on this, AND they have now changed the wording on their website to remove the line that the Princess experience is to “grant little girls’ wishes” to make it more inclusive.

Which further proves the point that their original response to my request was wrong in every way…legally and morally.

We are taking this situation very seriously and sincerely apologize to Hayley and Noah for the distress caused.

An isolated incident, the cast member’s response is not reflective of any policy or belief held here at Disneyland Paris. We are going to ensure this does not happen again.

Diversity is near and dear to our hearts and we want to make sure that all our guests enjoy their experience at our resort.

Of course, both boys and girls are welcome to enjoy The Princess For a Day experience in addition to all our other special activities.