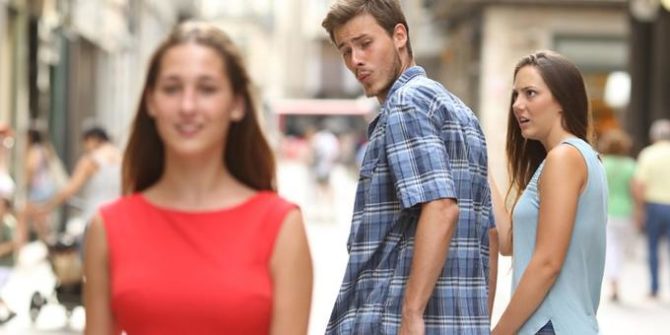 The Distracted Boyfriend meme is so 2017. (And besides, a Swedish court found it sexist anyway.) Happily, there’s a homoerotic version that’s even funnier. Meet Distracted Groom.

In the photo — popularized by a tweet from “casual gaymer” @skylxrksays — a baby-faced groom is distracted by a muscle-bound daddy type emerging from the water behind him and his bride. The groom seems transfixed, perhaps because the handsome interloper is wearing nothing but a tiny swimsuit, while the bride seems oblivious to her future husband’s gaze.

Is… is this an improved version of the "Distracted Boyfriend" meme pic.twitter.com/VihmJGDnx6

“Is… is this an improved version of the ‘Distracted Boyfriend’ meme,” @skylxrksays wondered as he posted the image. The post’s 108,000 likes at the time of this post would suggest the answer is yes.

The Internet is no doubt trying to identify this burly beachgoer and perhaps find him on Grindr, but in the meantime, enjoy some of our favorite iterations of the meme below: