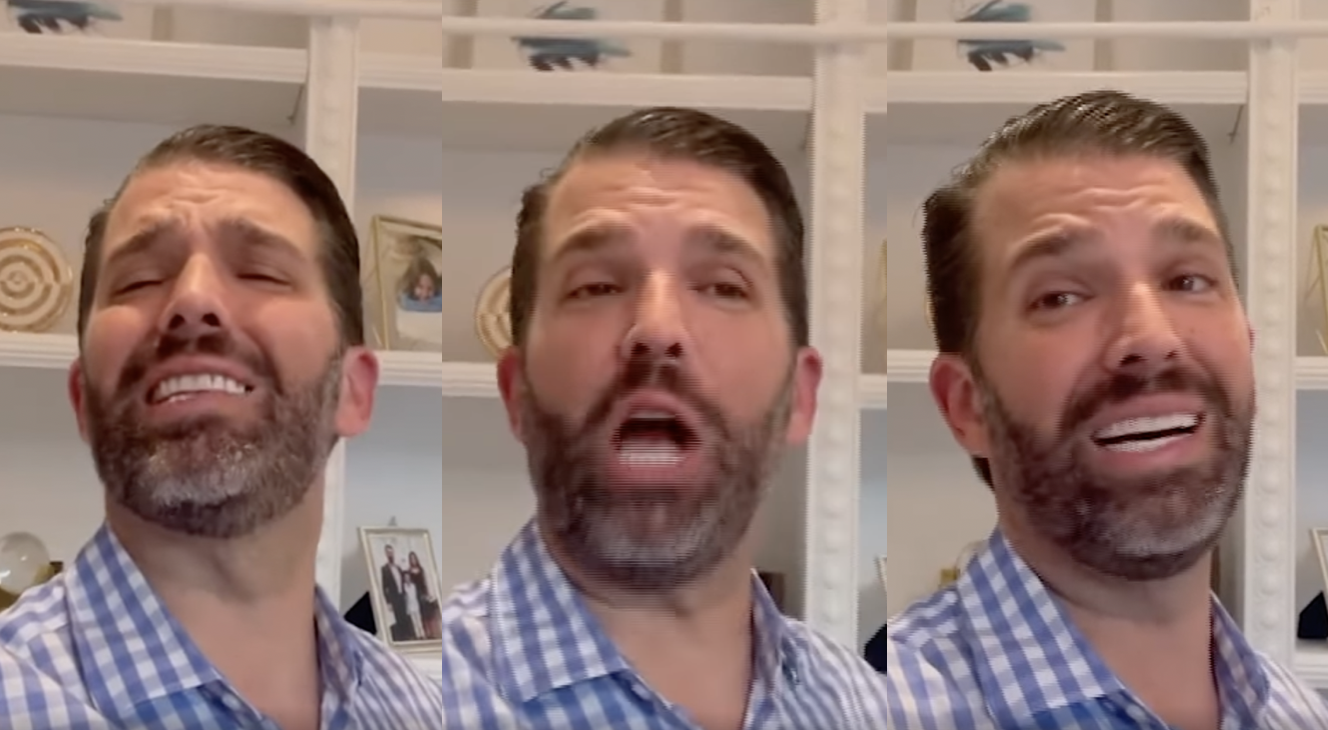 Don Jr. is talking about something, just don’t ask anybody what it is.

The ex-president’s eldest son posted a truly bonkers four-and-a-half-minute video to his Facebook page titled “Pathetic: Biden can’t read a teleprompter!” yesterday, in which he made all sorts of wild claims about… um… we’re not entirely sure.

Related: It sure looks like the January 6 committee is getting ready to subpoena Don Jr.

“You know what, can’t put Joe Biden in the same room with someone, he might let one rip,” a glossy-eyed Don Jr. slurred at one point in the video.

“Guys… Joe Biden… is what stands between us and… a nuclear capable China. Joe Biden is the guy they’re gonna call at three in the morning… if there’s a serious crisis… with Russia.”

Don Jr. is on another bender. The pressure must be getting to him. His deranged, slurred, unnatural, speech is clearly drug fueled. pic.twitter.com/4QBth83fDj

Seriously, this might be worse than that awful fart video he posted back in November 2020.

In the video’s caption, Don Jr. included a link to his online store and a coupon code for 15% off, encouraging his followers to “Make a patriotic statement with this merch!”

The video comes one day after Michael Cohen alleged on MSNBC that Donald Trump once told him that if legal action is ever taken against the Trump Organization, he wants Don Jr. to take the fall instead of Ivanka.

Related: The Jan. 6 committee has Kimberly Guilfoyle’s phone records and everyone is thinking the same thing

“Donald said it to me, I mean I wouldn’t say it if it wasn’t said directly to me, he goes ‘if one or the other has to go to prison, make sure that it’s Don because Don would be able to handle it’,” Cohen claimed.

Jr. and his sister are currently fighting a subpoena from the New York attorney general’s office seeking their testimony in an ongoing civil investigation into the family’s business.

Naturally, Twitter has a lot to say about the matter…

My beloved, departed grandmother would have taken on look at Don Jr. and whispered in her Southern accent.

cocaine and Don Jr. are trending together because of course they are

Hunter Biden is trending so you know Don Jr. was recently on Twitter as high as a kite.

All kidding aside, @DonaldJTrumpJr is in very bad shape. Regardless of how loathsome a human being he may be, he is in the throes of a serious drug – and probably alcohol – addiction and needs help. At the very least @kimguilfoyle, take away his phone.

Kimberly Goilfoyle is just as bad as Don Jr.

What do you think Don Jr is on? I say coke and alcohol. I was a drug and alcohol counselor so I'm pretty good at this.

Is anyone in Don Jr.'s orbit gonna do an intervention and talk to him about his video? I'm sure even the girl in The Ring heard from a friend or two about her creepy video.

Prison awaits for Don Jr, Ivanka and Eric Trump. Daddy won’t be able save them from his prison cell. #LockThemAllUp pic.twitter.com/6q8nJNxKD3

Watch the full video below. Or don’t.