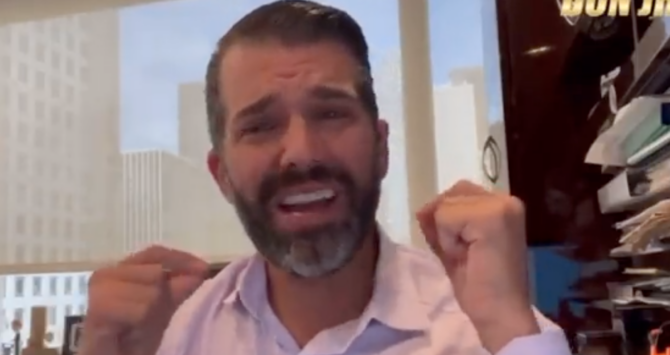 When video of an unhinged public figure starts circulating online, it’s usually the result of an orchestrated leak by a rival or because a witness happened to pull out their phone and hit record.

Donald Trump Jr. is the exception to the rule, and his latest self-recorded rant about Monday’s leak of the United States Supreme Court’s draft majority opinion ending abortion rights is perhaps his most crazed performance yet.

Unconcerned with the reality that millions of Americans may soon lose their rights, Trump instead frothed at the mouth over the leak itself, demanding a “criminal investigation” despite no evidence of a crime having occurred.

The crazy train really picked up momentum when Trump argued that the FBI should lead a probe because it once investigated a suspected noose hanging from NASCAR driver Bubba Wallace’s garage door, which ended up being a non-story. And either way, that logic is a bit hard to follow.

“If they don’t send people to investigate this, then again, we live in a clown show state,” Trump asserted before claiming, without any evidence, that the leak was carried out by a “pissed off leftist.” Then he said something about how the leak amounts to “general coordinating with communist China, giving Chinese generals examples of what our response would be.”

Trump’s tirade, coupled with his erratic behavior, led more than a few people to wonder…is he OK?!

Blah blah blah. It’s not a crime to leak draft opinions, probably against court rules but that’s it. He doesn’t know what he’s talking about. And he looks like he’s on speed

100% not bloody likely. (and the hand seizures are wayyyy worse than usual, which can be explained by the fact he testified for the jan 6 cmte yesterday and then went HARD with the powder bc of the stress…)

Wait until he hears about the Top Secret documents that were stolen by his father.

“You gotta do a lot of blow to get that wired” pic.twitter.com/bB9MY4mfT6

No. He needs help. An intervention is in order sooner rather than later.

No, he really isn’t. And I don’t think we can hold our breaths for an intervention from his family. As much as we (and that includes me!) love to make fun of him, this is one sad story sitting before us, here.

If you watch it with the sound off, there is no mistaking the signs.

Does nobody care about him enough to stage an intervention?

Subscribe to Queerty for a daily dose of #politics #donaldtrumjr. #roevswade stories and more