Not content with trying to make money from the whole ‘Let’s Go Brandon’ malarkey, Donald Trump Jr. is pushing more of his merchandise as potential Thanksgiving gifts.

He took to Twitter last night to showcase some of the latest additions to his clothing range. This includes hoodies and T-shirts emblazoned with LGBTQ in rainbow lettering. The initials spell out the phrase: Let’s Get Biden To Quit. 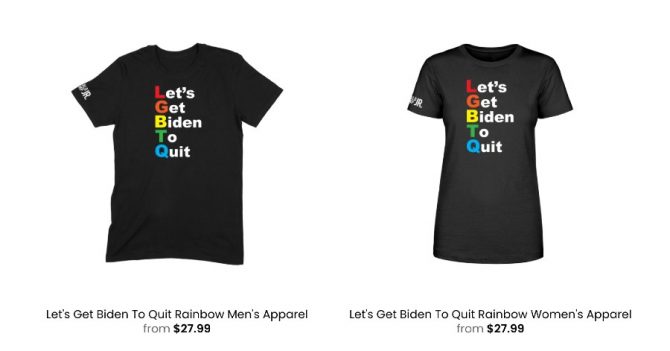 Jr. clearly thinks the joke hilarious and posted a caption saying they’d make the perfect gift: “Want a perfect surprise for your favorite lib relative this Thanksgiving? Check these out. Make a statement without saying a word.🤣🤣🤣”

Want a perfect surprise for your favorite lib relative this Thanksgiving? Check these out. Make a statement without saying a word.🤣🤣🤣 https://t.co/BFLs6boLop pic.twitter.com/VD7kRdjQRI

Jr. has increasingly been posting links to his merchandise store in recent weeks, but then again, the Trump fortunes have waned since daddy left the White House last January.

Earlier this week it was announced the beleaguered Trump hotel in Washington DC was in the final stages of being sold and relaunched as a Waldorf Astoria, after hemorrhaging more than $70 million over a three-year period.

On Tuesday, it was revealed that a big event Don Jr. was set to appear at in Missouri has been canceled. The December 3 event was organized by the conservative Defense of Liberty political action committee.

However, payment processor WePay (owned by JPMorgan), said it was cutting ties with the event, saying the organization violated its terms. Specifically, a T&C that made it, “unable to process for hate, violence, racial intolerance, terrorism, the financial exploitation of a crime, or items or activities that encourage, promote, facilitate, or instruct others regarding the same.”

WePay says it has already refunded $30,000 in ticket sales. The event was expected to attract around 3,000, and beyond the standard ticket price, attendees could pay $500 for a special meet and greet with Don Jr.

After WePay said it had refunded everyone’s money, the event was canceled, with organizers fuming. Defense of Liberty founder Paul Curtman told Missouri Independent, “I can’t think of a single instance where anything we have done at any one of these events violates one of their terms of service,” he added. “They are trying to shut us down because they don’t like our politics.”

Subscribe to Queerty for a daily dose of #politics #donjr. #dontrumpjr. stories and more