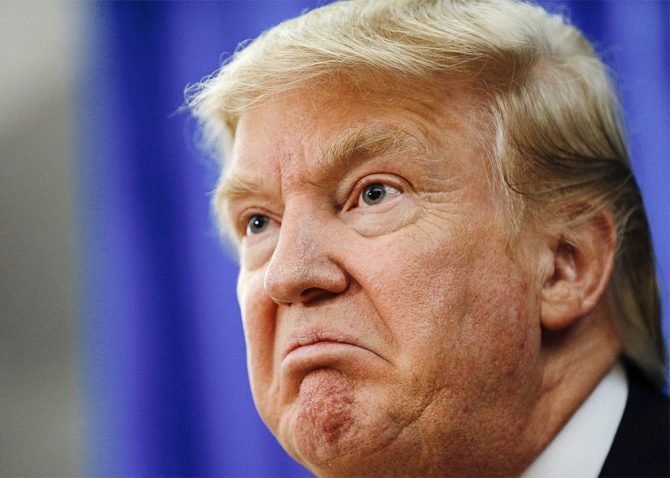 Less than a month into the job and Donald Trump is reportedly over being president. At least according to several anonymous sources who spoke to Politico.

Related: Check out the glaring typo on this Library of Congress Trump poster

According to one of the sources, Mr. Trump’s “mood has careened between surprise and anger as he’s faced the predictable realities of governing.” Tension runs high and paranoia runs deep within the administration, with another source claiming people are “very careful who they talk to.” And Trump, who is said to be a micromanager, and his innermost circle are convinced the National Security Council are “out to get them.”

On top of all that, sources say Easy D often asks very elementary questions about the most basic policies, and when people try to explain them to him, he appears to quickly grow confused by the details and will find a way to change the subject, the source believes, to “seem in control.” (The New York Times adds that he likes his memos kept to a single page, written in bullet points, maps, and graphs. “The president likes maps,” one official said.) For instance, Donald doesn’t seem to understand how a judge can overrule an executive order or why lawmakers might delay a cabinet confirmation, a claim that seems to be supported by his angry tweets:

Just cannot believe a judge would put our country in such peril. If something happens blame him and court system. People pouring in. Bad!

It is a disgrace that my full Cabinet is still not in place, the longest such delay in the history of our country. Obstruction by Democrats!

I call my own shots, largely based on an accumulation of data, and everyone knows it. Some FAKE NEWS media, in order to marginalize, lies!

In addition to watching television for hours and hours (and hours) a day, as reported by the New York Times last month, Trump also allegedly likes to take breaks throughout the workday to call up his old golfing buddies and talk about what they love most: Golf. There’s even a running joke among aides that he would rather be on the golf course at Mar-a-Lago (which we calls the “Winter White House”) than sitting in Washington, D.C., another claim that seems to be supported by his tweets:

Melania and I are hosting Japanese Prime Minister Shinzo Abe and Mrs. Abe at Mar-a-Lago in Palm Beach, Fla. They are a wonderful couple!

A working dinner tonight with Prime Minister Abe of Japan, and his representatives, at the Winter White House (Mar-a-Lago). Very good talks!

Yeah, we kind of figured he wouldn’t.

Donald, the feeling is mutual.