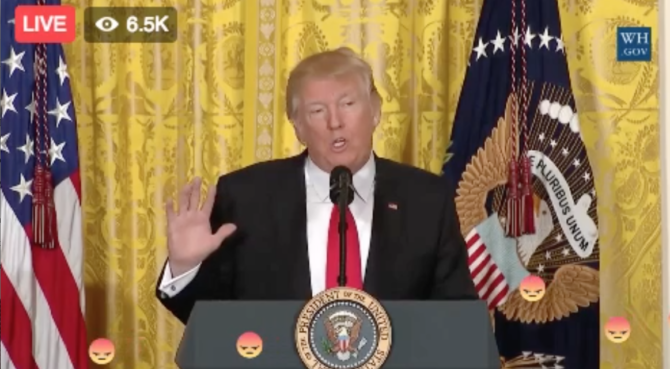 “The media’s trying to attack our administration because they know we are following through on pledges that we made,” Donald Trump said at his press conference on Thursday. “And they’re not happy about it for whatever reason. And, but a lot of people are happy about it. In fact I’ll be in Melbourne, Florida 5 o’clock on Saturday, and I heard — just heard that the crowds are massive, that want to be there.”

This is the world in which the President lives — one in which he has the backing of the American people.

No matter that his Pew Research approval rating is currently at a historical low — just 39% — and so what if members of his own administration keep leaking to the press what an utter mess it is behind the scenes at the White House. The people love him, he can just feel it!

But watching the conference live on Facebook, another story emerges.

Viewers can react during a live feed, and those reactions cascade over the image in real time.

Here’s a snippet of the president’s statements that The Hill broadcast — notice a pattern emerging in the reactions?

It’s not exactly a sunny reception. One heart to every 15 angry faces — sounds about right.

And how’s Sean Spicer doing by the same metric? We’re sure this comes as no surprise:

true or not?
9 comments