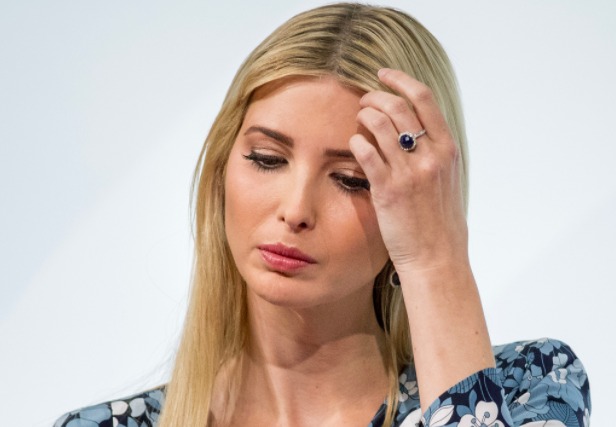 The War on Christmas rages on. And the latest attack has come from within our very own White House!

Ivanka Trump has come under fire for rebelling against her father by using the secular phrase “Happy Holidays” instead of “Merry Christmas” on her Twitter profile this week.

Yesterday, the first daughter tweeted a photo of herself alongside two other women in front of a Christmas tree with the caption “Happy Holidays.”

One of Donald Trump‘s biggest campaign promises was that he would force people to say “Merry Christmas” again.

Speaking to a crowd at Liberty University in January 2016, then candidate Trump asked the auditorium, “When was the last time you saw ‘Merry Christmas’? You don’t see it anymore! They want to be politically correct. If I’m president, you will see ‘Merry Christmas’ in department stores, believe me. Believe me.”

Ivanka’s tweet yesterday immediately sparked an cannonade of holiday hand-wringing and gnashing of teeth, with many people scolding her for defying her father’s wishes.

The war on Christmas begins! Ivanka casts the first stone.

WE DONT SAY HAPPY HOLIDAYS!!! WE SAY MERRY CHRISTMAS!!! YOUR DADDY BROUGHT IT BACK!

Careful, now. The Merry Christmas police will get you.

Your dad didn’t bring “Merry Christmas” back so you can tweet “Happy Holidays.”

IN AMERICA WE SAY "MERRY CHRISTMAS"!

Your father said so!

My husband is from England and had always said "Happy Christmas" but he can't anymore because he lives in America!

Even though it's Hanukkah, we now have to say Merry Christmas because your father "saved" Christmas ?

Your daddy is gonna give you a spanking! pic.twitter.com/ayzTOBz1H1