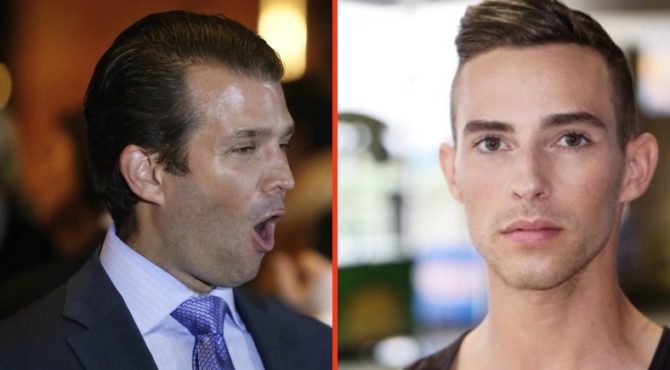 When you’re named after one of your parents, there’s an expectation to carry on a legacy.

And if your name is Donald Trump Jr., that legacy is 97% about actively trying to be Twitter’s biggest douche.

In this, Trump Jr. is excelling.

The President’s son took to Twitter Tuesday night to lash out at the first openly gay American to win a medal at the Winter Olympics, Adam Rippon.

The Tweet came in response to a reprt in The Hill that quoted Rippon saying he didn’t want his entire Olympic experience in South Korea to revolve around his tension with Mike Pence.

Really? Then Perhaps you shouldn’t have spent the past few weeks talking about him. I haven’t heard him mention you once??? https://t.co/8lcCsoyBsq

But if he’s going to be a Twitter troll, he needs to spend more time on Twitter.

Then maybe he would have seen Mike Pence doing the exact thing he says Mike Pence didn’t do:

.@Adaripp I want you to know we are FOR YOU. Don’t let fake news distract you. I am proud of you and ALL OF OUR GREAT athletes and my only hope for you and all of #TeamUSA is to bring home the gold. Go get ‘em!

We can’t imagine why Adam would want to refocus his energy on the biggest skating performances of his life rather than try to unpack the lies and propaganda of Pence’s tweet.

The adoption of “fake news” is especially nauseating, as if there aren’t ample reliable sources documenting the Vice President’s unwaverinng antigay past:

Hey, Don…It’s really not like you to get your facts wrong…What would your father say about you spreading FAKE NEWS? SAD! pic.twitter.com/yngPsDhTFj

Well pences office did want to arrange a meeting!

Mike Pence tweeted about him explicitly.

You not paying attention isn't exactly news. But here ya go: https://t.co/nEa20WvetD

Dude, go. Away. Shut up. Please. Pence hasn’t talked about him? Yes. Yes he has. Pence has also, in his lifetime, been a prejudicial dickbag against all gay people.

Remember when you and your family said to keep politics out of sports? Oh wait! That’s when it fits your agenda. Leave Rippon alone JR