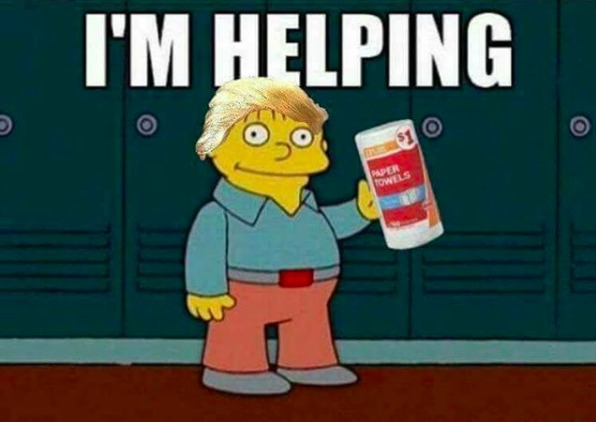 So in case you haven’t heard, after firing off a bunch of snarky tweets at Carmen Yulín Cruz, the mayor of San Juan, over the weekend, then dedicating his golf trophy to the victims of Hurricane Maria, Donald Trump finally flew down to the island for a quick, four-hour visit yesterday.

While there, Trump completely avoided Cruz after she confronted him about the tweets (a classic of case of being able to dish it out but not take it), then he proceeded to throw paper towels at flood victims before boarding his helicopter and leaving an hour earlier than planned.

An outcry ensued. Then came the memes.

Scroll down for your favorite Trump paper towel memes (so far)…

The numbers certainly don't lie! . Stats provided by @TheSecretMeme! Follow them for more! . Oh, and follow @Spettacomedy, too! He made this! . #Trump | #PaperTowels | #Spettacomedy

..all I could come up with. not bad for 4 minutes work. this jackass is just unbelievable. #yourefired #photoslop #papertowels #fucktrump

#embarrassing for the #papertowels especially!!

this was too funny #trumpman ? #donaldtrump #trump #jumpman #papertowels

All the right moves.

A gaggle of shirtless Brazilians are getting their choreo on point

Fight for a cure
7.5K shares

This former marine stole a truck to save Vegas victims, and just received this text from its owner

‘It’s like an implosion’: NBC scrambling to deal with the disaster that is Megyn Kelly

All the right moves.

A gaggle of shirtless Brazilians are getting their choreo on point