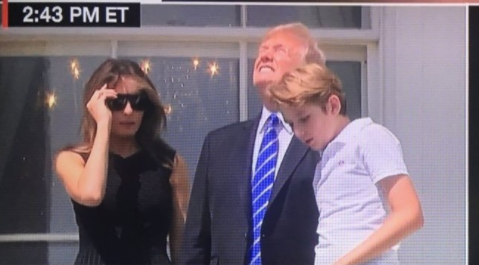 Sure, scientists have repeatedly warned everyone not to look directly at the sun. There are other, safe ways of viewing the solar eclipse, they said.

But hey, if you think climate change is a hoax, why believe anything else those nerds say?!

That seems to have been Donald Trump‘s position as he stared up at the flaming mass we lovingly refer to as our sun.

Together with Melania and Barron, the first family stood out on the Blue Room Balcony of the White House to observe the astrological event. Naturally, they had the protective eyewear necessary to view the eclipse.

Then the Donald took off his glasses, gestured to a large crowd of aides on the South Lawn, and stared blankly up at the sun. One staffer reportedly yelled, “Don’t look!”

Could there be a more fitting image to sum up this presidency?