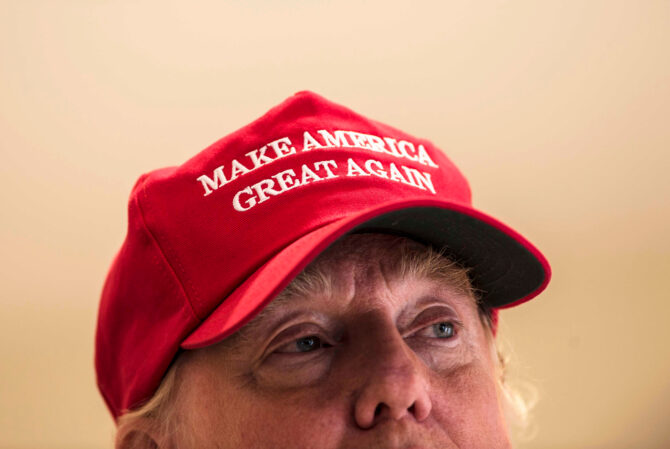 Donald Trump quietly made a surprise visit to Washington D.C. yesterday, prompting all sorts of online chatter about what the ex-president, who never goes anywhere without a great deal of pomp and circumstance, was doing there.

Related: Rosie O’Donnell hilariously claps back at TikTok user who accuses her of being mean to Donald Trump

Video of Trump dressed in plain clothes and white golf shoes and quickly transferring from a private jet into a black SUV waiting for him on the tarmac hit the internet Sunday evening.

'It's gotta be the shoes'. What do they tell you? This is apparently Trump getting off a plane in DC tonight. pic.twitter.com/UwI0ksqMZ7

Trump, who has only visited Washington D.C once since he left the White House in January 2021, made no mention of the trip on Truth Social, the social media account he frequently posts on, or via any other statement.

The surprise visit has resulted in a range of theories being shared online. Some have suggested that Trump may be in D.C. because he is due to be arrested by the Department of Justice, or that he may be visiting the Walter Reed hospital for health reasons.

Of course, there could be any number of totally legit, non-sinister reasons why the one-term, twice-impeached ex-president traveled to Washington, D.C. in the weeks leading up to the 2022 midterm elections. But the shroud of mystery behind his visit has people’s imaginations working overtime.

Trump is in DC 57 days before the election

So, if the theories of indictment hold true, this would be perfect timing

Also, indicting Trump on 9/11 would be sweet, beautiful justice

“Trump is in DC for his reinstatement” – The Pillow Guy

Rudy Giuliani when he finds out Trump is in DC pic.twitter.com/jM9b8ZOLC9

I hope Trump is in DC to speak to a grand jury. He must be here for some reason even he can’t spin because his arrival was unannounced and hush hush.

Why Donald Trump is in DC? What is the tea, hunny?

Trump is in DC.

The suspense is terrible. I hope it lasts. pic.twitter.com/BcQapdreCb

Trump is in DC and hasn't said anything on social media at all. Highly unusual for such an attention thirsty man.
It's almost as if someone confiscated his phone.

Is there any particular Treason why Trump is in DC …?

Maybe Trump is in DC to go to Walter Reed to have those top secret documents he ate removed from his colon.

Trump is in DC tonight possibly not by his choice. Possibly he is being trade to Russia for Brittney Griner and a third round draft pick

A lot of folks have asked, but I don’t have a clue why Trump is in DC. My thoughts:

It’s not often Trump does anything without fanfare, so this makes me think it’s a narrative he can’t control. pic.twitter.com/IGXsPzeBhb

Trump’s unannounced trip to D.C. comes at the same time a new book by New York Times reporter Maggie Haberman is about to drop.

According to Haberman, Trump allegedly told aides that he wouldn’t leave the White House in the days following his 2020 election loss, saying: “We’re never leaving. How can you leave when you won an election?”

Haberman’s book, “Confidence Man: The Making of Donald Trump and the Breaking of America,” is being released on October 4. The revelations from the book come as investigators in the US House and the Justice Department probe Trump’s refusal to cede power after the 2020 election. The House select committee investigating January 6 is planning more hearings and a final report this fall, while federal investigators have recently served several former Trump aides with subpoenas.