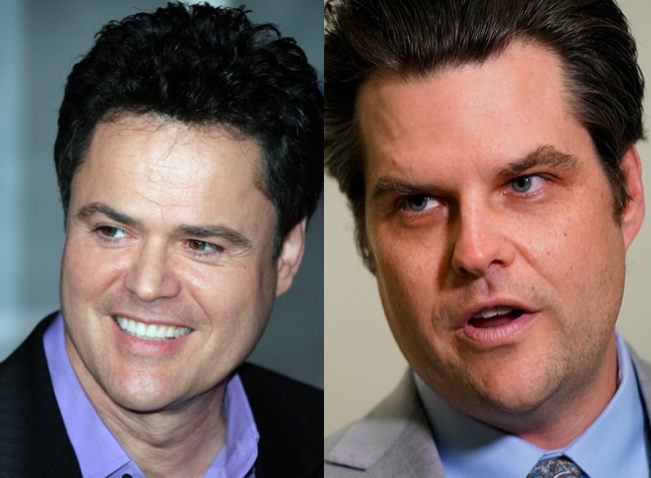 Donny Osmond is currently trending on Twitter and it’s all Matt Gaetz‘s fault.

The ’70s teen idol was probably thrilled when he woke up this morning to see he was in the news!

…Until he learned that it was because people just noticed that he bares an uncanny resemblance to the antigay congressman who is currently ensnared in a teen sex trafficking scandal.

Matt Gaetz looks like somebody tried to draw Donny Osmond from memory.#MattGaetzIsAPervert pic.twitter.com/NpuGJVAMbm

But not everyone agrees with the comparison…

Donny Osmond is trending for reasons he doesn't deserve. And there's a much better match for Matt Gaetz already: pic.twitter.com/Kv3x3f5M4n

Teenage girls had posters of Donny Osmond on their walls. Matt Gaetz has pictures of teenage girls on his.

Gaetz’s teen sex trafficking scandal appears to be heating up. According to his most recent financial disclosure released last week, he’s been burning through cash, mostly to pay for lawyers.

In the last three months, he’s spent five times more on legal services than he did in the previous three years. Not only that, but he’s hired the law offices of Marc Fernich to represent him. The firm is most famous for representing, wait for it, alleged child sex predator Jeffrey Epstein.

Now, before you go getting upset that people are comparing poor Donny Osmond, a beloved ’70s icon, to one of the most obnoxious members of Congress, let us remind you that the two men have a lot more in common than just their large foreheads and toothy grins.

In 2015, Gaetz said he disagreed with the Supreme Court’s ruling on marriage equality, calling it a “threat to our democracy.” He also opposes the Equality Act. Oh, and let’s not forget that he’s good friends with Donald Trump, one of the most homophobic presidents in modern history.

Meanwhile, Osmond, a devout Mormon, believes being LGBTQ is a choice and that gay people need to do a better job at not, in his words, “[succumbing] to temptation.”

He also opposes same-sex marriage and thinks LGBTQ  people should only be welcomed into his church if they promise to be celibate, going so far as to post a statement on his official website that said:

I love my friends, including my homosexual friends. We are all God’s children. It is their choice, not mine on how they conduct their lives and choose to live the commandments according to the dictates of their own conscience.

And just in case that wasn’t bad enough, his own niece, Jessica, the eldest daughter of Donny’s sister Marie, is a lesbian. When Jessica married her wife in 2019, he didn’t publicly congratulate her and it’s also unclear if he attended the wedding.

If you ask us, these two sorta seem like they’re made for each other.