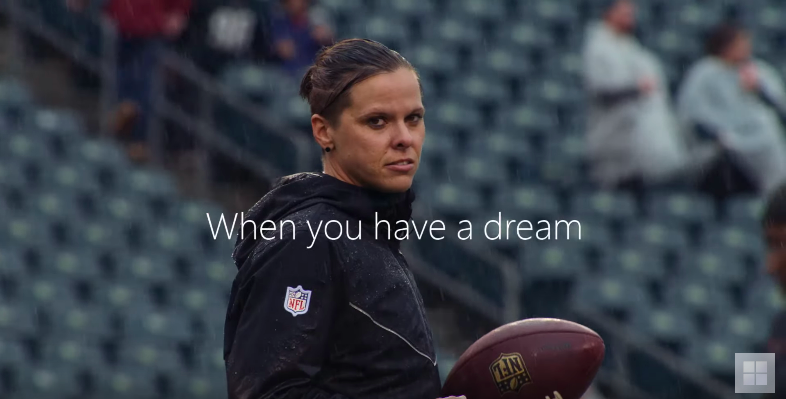 We don’t know yet how many commercials will queer up the San Francisco vs. Kansas City matchup at the Super Bowl this year but one likelihood is a new Microsoft Surface Pro 7 spot about the NFL San Francisco 49ers’ assistant coach, Katie Sowers.

She is the league’s first openly gay coach, male or female, though the ad doesn’t mention her sexuality because that’s so 1998. In the only nod to her pioneering position, she says, “I’m not just here to be the token female, I’m here to help us win.”

For a decade, PepsiCo/Frito-Lay shook up the ad industry with its annual “Crash the Super Bowl” contest for Doritos, attracting many gay themes by amateur filmmakers (only two made it to the Super Bowl).

We’ve pulled together seven hilarious queer, if not downright odd, Doritos contenders. On the 22 Super Bowl LIV vote for your favorite blast from the past:

This spot — one of three from 2011, and the only one that actually aired on the big game — has two men eating lunch together at the office. One leans in close and asks, “Hey, are you going to finish those?” The other says they’re already gone. “No they’re not, you left the best part,” replies the first. He then grabs the man’s hand, which is covered in the brand’s signature orange “cheese” dust, sucks the finger and bursts out “Mmmm cheese!” In the closing scene, a hapless man finishes his bag and wipes the orange dust on his pants. The previous guy appears behind him and de-pants the man, stripper-style, then sniffs those pants.

Also in 2011, a man is clipping the hedges and peers over at his neighbors — two gay men lounging by the pool, eating chips and enjoying umbrella drinks. He licks his lips as his wife brings him a cold drink but she sneers at him for staring at the guys. One of the gay boys waves and says, ”Hey Barbara!” The other follows suit, waving his hand above his head. Later he says, “Told you so,” and his friend affirms, “Mmmhhmm.”

Two men sit side by side in a sauna, one skinny and one muscular. The skinny man glances over and sees that his acquaintance’s eyes are closed, so he sneaks a peek to his crotch and his mouth opens in amazement. He continues to glance down, and finally reaches between his legs. The muscular man wakes, perturbed to find a hand in his bag of Doritos, which is strategically placed between his legs. In the twist ending, the muscular man has his arm around the other while feeding him Doritos and asks, “You like that?”

A few years went by without any contenders, then 2013 was another queer year for Doritos’ amateur ad producers.

In this one (which won and aired on the Super Bowl), a young girl in a princess costume asks her father to play dress-up with her. Her dad, holding a football says, “Sweetheart, I’d love to but the guys are waiting outside for me.” She then pulls out a bag of Doritos and her father stares contemplatively at the bag. Later, he is doing a runway-style turn, dressed in a gown with a feather boa and poorly applied makeup. At first, the friends are confused but in the closing shot the group of men are all dressed in drag. Then his wife walks in and tensely asks the bearded man wearing a veil, “Is that my wedding dress?”

A queer brother to the first ad from 2011, this spot actually suggests a glory-hole.

Three workmen are taking a break with some lunch. They are eating bags of Doritos and one has orange dust on his hands so his boss instructs him to use the cleaner. There’s an on-off device against the wall with a small hole in it and the man sticks his index finger in. He makes a weird face during the clean, pulls his finger out and says “touchdown.” His boss notes that it only works with Doritos. The man wonders, “Why only with Doritos?” The boss looks back and ominously says, “You ask too many questions, Billy…” On the other side of the wall is a man in a tie working at a computer in an office. An orange finger appears through a hole in the plain white wall, he leans over and sucks the finger clean.

Three men are fishing with Doritos chips, speaking in an unknown language. The first one catches a large fish. Then next one catches a beautiful mermaid, sucking on his finger. The third man, now jealous, grabs the bag of chips and tries to catch one as well. He puts his face in the water and pulls up a daddy-type merman in a romantic kiss.

This commercial-within-a-commercial is written and directed by gay models (twins Gary and Larry Lane, who also appear) and stars the diminutive, gay comedian Leslie Jordan (“Will & Grace”). Jordan walks in for a try-out but feels out of place among tall male models. Speaking on the phone, he looks at the competition and announces, “Oh, twins! Well, maybe I will stay.”

Selected for the commercial, Jordan is now surrounded by two beautiful women feeding him Doritos and two other hunky models behind him, with everyone in swimsuits. The flamboyant director repeatedly tells Jordan to “Go bold!” Out of other moves, Jordan decides to drop his swim shorts to everyone’s dismay. In the closing, the director concludes darkly, “Too bold…”

In the extended ending, the male models also feed Jordan.

Tell us your favorite — vote below!